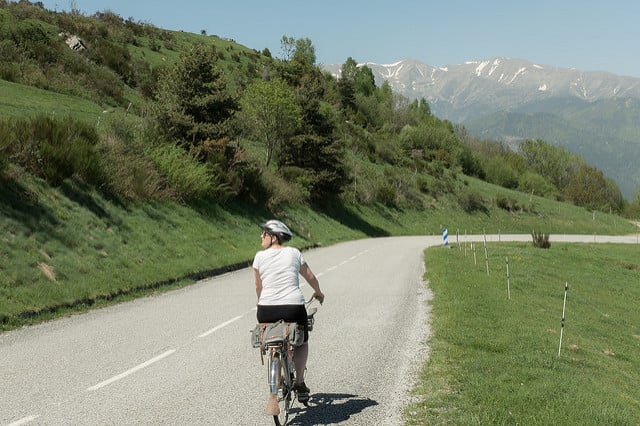 Photo: Cat Burston/Flickr.
France is known for being a wonderful country for cyclists and not just because of the famous Tour de France race every summer.
French people are particularly enthusiastic cyclists — in fact in 2016 no fewer than 3,034,000 bikes were sold throughout the country.
Drivers are generally considered to be understanding of their friends on two wheels and there is an abundance of picturesque villages and scenic landscapes offering a feast for the eyes.
But before you do as the French and hop on your bike, these are the rules you need to know.
The basics
When cycling in France remember to make sure that your bike is properly equipped: it must have a white light at the front and a red one at the back, a bell with a 50-metre range and pedals with orange reflectors.
You also need to remember that when cycling at night (and when visibility is bad) you should wear a high visibility vest and should avoid cycling two abreast.
And don't use your mobile phone and cycle at the same time or you could be fined €35.
READ ALSO: People cycling in Saint-Cyprien, southern France Photo: AFP
Priorité à droite
One of the most complicated parts of cycling in a foreign country can be knowing which signs apply to you and, of course, what they mean.
One of the most important ones for you to remember, explains Jon Lethbridge from Loire Life Cycling, is the red triangle with a cross (see below) which appears when you are approaching a junction.
It means that you must give priority to the right — “priorité à droite”, which is one of the foundations of France’s rules of the road and means cars arriving from the right at an intersection have right-of-way.
In short: If you're driving and there's a vehicle trying to join or cross the road to your right, then you're obliged to let them in.
But this is made more complicated by the fact that sometimes you don't actually have to give way to the right.
In fact, some French junctions won't have stop signs nor traffic lights and are governed entirely by this principle. So it’s generally a good idea to take it slow through any uncontrolled intersection in France.
“Sometimes drivers will let cyclists go first but this can really depend on which department you're in and can be a bit hit and miss,” Lethbridge says.
“Take it steady and catch the eye of the driver to get an idea of what they're going to do,” he adds.
Can you run a red light?
You can't ignore a red light unless a “give way” sign (see below) is attached.  The signs are accompanied with an arrow showing cyclists which way they go if they go through the red light.
The rule, which was brought in in July 2015, means that cyclists can carry straight on or turn right or left without waiting for red, although it will depend on each intersection.
And of course, you need to make sure that you're not about to get run over by a car coming from a different direction or by pedestrians running across the road.
Photo: Joancharmant/Wikicommons
Sauf vélo
Another important sign for you to familiarise yourself with is the 'sauf vélo' (except bikes) signs which you'll see dotted around villages and towns (see below).
These are there to let you know that even though other vehicles can't go down that street — for example if it's a one-way street — bikes can. Photo: Hegor/Wikicommons
Avoid 'routes nationales'
These are France's next main roads after autoroutes (motorways) but unlike motorways, which are out of bounds for cyclists, you can cycle on them.
However you will have a much more pleasant trip if you can avoid them, says Lethbridge, not least because of the number of trucks on these roads.
“One of the best things about cycling around France is that for every route nationale there is a smaller departmental route with next to no traffic,” Lethbridge says.
“So, why not make the most of them and take the scenic route?” he said. Bike safety diagram. Photo: French government website
Make your presence known
Don't be tempted to get as close to the verge as possible when you notice a car approaching you from behind.
While this might be what you're used to doing in the UK, in France drivers tend to be “more understanding” towards cyclists, Lethbridge says.
“Stay a metre away from the verge and give yourself space so that the driver notices you're there and slows down,” he adds.
Walk across bridges
Make sure you keep an eye out for the “vélo a main” (literally “bike in hand”) which often appear at bridges in small towns.
This means you should dismount and walk your bike over the bridge using the pavement. Tourists enjoy the Puy du Pariou, a volcano located in the Massif Central. Photo: AFP
Helmets
Wearing helmets is not compulsory for adults when cycling in France, but it is for children under 12-years-old both when they're cycling and when they're being carried as a passenger.
For adults accompanying children who are not wearing a helmet, there's a €135 fine.
“It's not as common for adults in France to wear a helmet when they're on a bike,” says Lethbridge. “It's far more common to see Brits, Australians and Canadians wearing them.”
Accidents
One of the big differences when cycling in France is where the blame lies in the event of an accident on the road which involves a cyclist.
The fault automatically rests with the the driver of the larger vehicle and the driver will have to prove that the cyclist was doing something really bad (or very drunk) that resulted in the accident.
This means that the majority of cars will give you a wide berth in order to avoid an accident of any kind.
Drinking and cycling
The question of drinking and cycling when you're in France is one that, unsurprisingly, comes up on a regular basis — especially for tourists who want to include some wine tasting on their cycling holidays.
But the truth is you shouldn't be cycling in France while under the influence. And there can be heavy fines for those who do — up to € 750.
“It's common sense, you must be clear and aware of what you do on your bike,” said Alexis Frémeaux, president of the Better Cycling association (MDB). Heading round the coast from Cap Fréhel to Binic. Photo: Steve Cadman/Flickr
No riding on pavements…
If you're tempted to avoid traffic by swerving onto the pavement don't – only children under 8 are allowed to do that.
And what about pedestrianised areas?
You can cycle in these areas but obviously it's important to remain considerate of the people walking there and adjust your speed accordingly. This is detailed in Article R431-9 of the Highway Code.
This section of the code also covers whether or not you can decide not to use designated bike paths.
The rules on this vary in different parts of France and it is up to local police authorities to decide how they manage it. In some places, there will be signs indicating what you should do — if a bike path sign is square, you can choose not to use the bike path and if it is round, using it is obligatory.
What to do if you have passengers?
Do not carry a passenger except on a seat attached to the bicycle and if the passenger is under 5 years old, the seat must be equipped with footrests and straps. and as mentioned the child must be wearing a helmet.
Could I lose my driver's licence?
No. It is not possible to have points deducted from your driver's license for committing an offense when you're cycling. But if you do, you may be fined, in the same way and at the same rate as a driver.
If there is anything else we have missed out, please tell us in the comments section below.