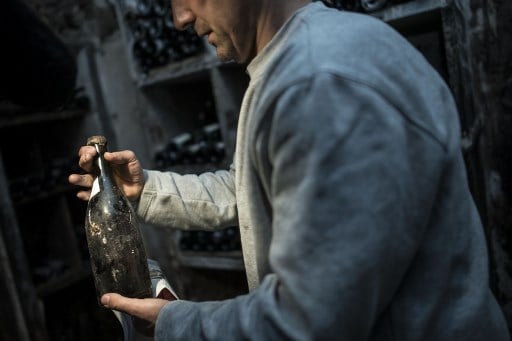 Two other bottles of vin jane were are sold for astronomical prices. Photo: AFP

All three bottles were produced by the winemaker Anatoile Vercel, whose family in France's Arbois region kept the vintage wines in a cellar for eight generations.

“I didn't think that these bottles would sell for so much. The last record set in 2011 was €57,000,” Jura Encheres auctioneer Brigitte Fenaux is quoted as saying by Deutsche Welle. “The buyers were Canadians and someone who used to buy for Americans with links to France”, she added.

“There were winemakers in the room who applauded, who were happy, it was moving.”

The bigger-than-average 87-centilitre bottles were made by Vercel using grapes harvested under the reign of Louis XVI.

“They are the oldest bottles of wines in the world on the market,” said Brigitte Fenaux of the Jura Encheres auction house, who will lead the sale.

“Having three bottles from this particular year and of such quality is exceptional,” said Philippe Etievant of Jura Encheres.

A panel of two-dozen wine professionals had already gotten a taste of the bottles at a tasting in 1994, when they discerned notes of “walnuts, spices, curry, cinnamon, vanilla and dried fruits”, rating it a 9.4 out of 10.

The bottles will cap the sale of 102 top wines from Jura on Saturday, when connoisseurs can also bid for a rare white wine from Arbois — a younger bottle, though, from 1811.