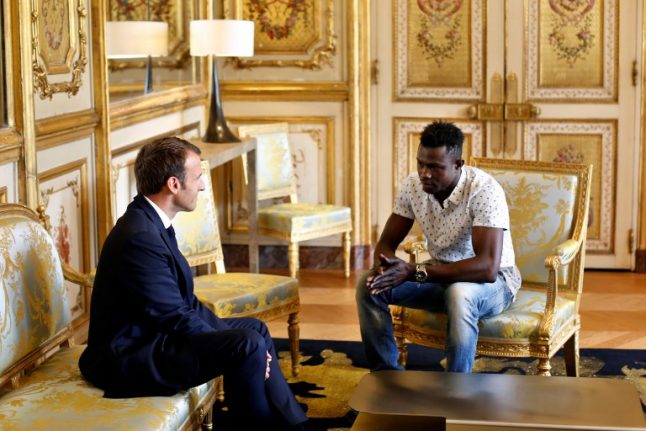 Screegrab: FranceIno
Mamoudou Gassama, a 22-year-old undocumented immigrant who carried out a spectacular rescue of a four-year-old who was dangling from a balcony in Paris has been rewarded by the French president.
Macron revealed on Tuesday after meeting with Gassama at the Elysée Palace that the young hero, dubbed “Le Spiderman” would be granted French citizenship and enrolled as a voluntary firefighter in the French fire service.
“You have become an example because millions of people have seen you. It is only right that the nation be grateful,” Macron told the 22-year-old, adding that his immigration status would be “put in order.” The president later tweeted: “With Mr Gassama who saved the life of a child after scaling four floors with his bare hands. I told him that in recognition of this act of heroism he would be regularized as soon as possible and that the Paris fire brigade were ready to welcome him.”

He will be granted a residency permit on Tuesday and French citizenship at a later date.
The act of heroism, which was the top news item for most French websites and television channels, comes as French lawmakers debate a controversial bill that would speed up the deportation of economic migrants and failed asylum-seekers.
Gassama has been living illegally in France and working in construction after arriving in the country.
During his meeting with Macron the Malian told him of his experience.
“I was trembling, I couldn't believe it,” he said. Macron asked what condition the child had been in once he'd been rescued.
“He was crying, his feet were hurt” said Gassama, adding that he had seen the toddler since the incident.
“Bravo,” replied the president.

Gassama's act of bravery which took place at around 8 pm on Saturday in northern Paris, was captured on film and viewed millions of times on social networks.

Film of the rescue shows Gassama pulling himself up from balcony to balcony with his bare hands as a man on the fourth floor tries to hold on to the child by leaning across from a neighbouring balcony.
On reaching the fourth floor Gassama puts one leg over the balcony before reaching out with his right arm and grabbing the child.
Who is 'le spiderman' – the hero Malian immigrant who saved dangling child? A petition was set up on Sunday calling for Gassama to be given the right to stay in France.
The petition states, “At the risk of his own life, [Mamoudou Gassama] climbed a three-storey building to save a dangling child.
“Thanks to the courage and determination of Mamoudou, the child is alive. Faced with this act, the Minister of the Interior has the power to offer another life to Mamoudou. “Mr. Gassama must be naturalized and decorated by the French Republic. He who saves a life, saves all humanity.”
In an interview with BFM TV Ian Brossat the capital's deputy mayor for housing said that “Paris would be on his side in assisting him to get his papers”. “I do not imagine that Gerard Collomb (France's interior minister) would put [the rescuer] in a detention center,” said Brossat, a guest of BFMTV.
In France authorities have the power to grant French citizenship to foreigners in exceptional cases, normally if they have “an exceptional talent” or for “service to the public” for example charity or humanitarian work. The decision normally rests with the local prefect.