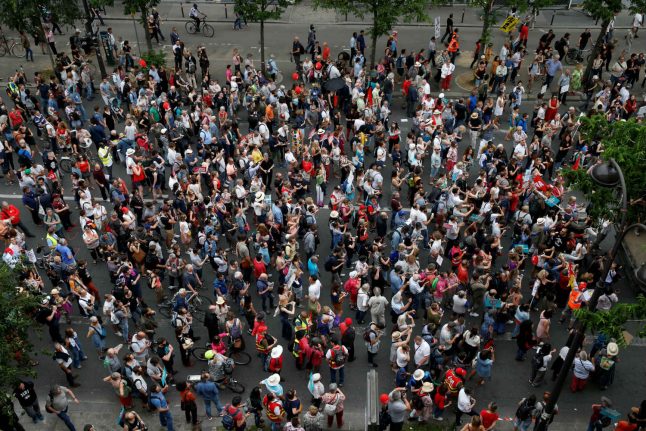 Photo: AFP
Organisers had called for a “popular tide” of protest for the marches, which were called by 60 unions, political parties and associations angry at Macron's political overhauls.
However, the turnout was well below previous similar marches. In Paris, police reported just 21,000 protesters, while the CGT leftist union claimed 80,000 and a total of 250,000 throughout the country.
Occurrence, an independent monitoring group working for media outlets including AFP, said 31,700 demonstrated in the capital. That compared with a police count of 40,000 and the CGT's count of 100,000 for the last such protest in the French capital on May 5. CGT had claimed a national turnout of 323,000 on March 22.
Macron said Friday during a visit to Russia that the protests “won't stop” his progress.
“I won't preside in light of the polls or demonstrations, because we have done too much of that,” (in the past) he said.
Saturday's marches follow strikes on Tuesday when public-sector employees from street sweepers to teachers joined rail workers in walking out over what they called an “attack” against public services.
It was the third day of stoppages and demonstrations by public workers since last year's sweeping election win by Macron, who has pledged to reduce spending, trim jobs and overhaul large parts of the vast French state.
PCF communist party secretary general Pierre Laurent addressed the crowds, saying: “When we have power so arrogant, so authoritarian in his methods, if the country does not show its strength and unity, we will not be able to push the boundaries.”
Forty-three people were arrested in Paris, most at the start of the demonstration at the Place de la Bastille. Police said some carried weapons, while others were held for violent acts.
Several dozen hooded demonstrators pelted police with bottles and other projectiles. The authorities used teargas after seven officers were hurt, but the clashes were limited, AFP journalists reported.
Interior Minister Gerard Collomb earlier told AFP the authorities want to limit the activity of the ultra-leftwing blocs who attacked police and property during clashes on May 1.
“I hope that this parade will be a calm parade, where people can express their opinion. We are in a republican state and those who want to break, loot, even attack the police force, are arrested in a preventive way,” he added.
In the southern city of Marseille, left-wing leader Jean-Luc Melenchon urged protesters to form a “popular front, which the people need”.
“The hard head of Emmanuel Macron must hear this message of the people,” the France Insoumis (Unbowed) party chief said. “The country is rich, the country has to share. We've had enough of the same people always having everything.
“In the name of the poor, humiliated, homeless, abandoned miners, we tell you 'Enough!'” he said.
France has one of the biggest public sectors in Europe relative to the size of its economy. The country has not balanced its budget since the 1970s, leading to a public debt equivalent to nearly 100 percent of GDP.
The unions accuse Macron, a former investment banker, of wanting to destroy public services — a vital source of employment and a pillar of communal life in many parts of the country.
While the CGT took part in Saturday's protests, the two other main unions, the CFDT and FO, did not saying they were too politicised.READ ALSO: Thousands stage anti-Macron protest in Paris