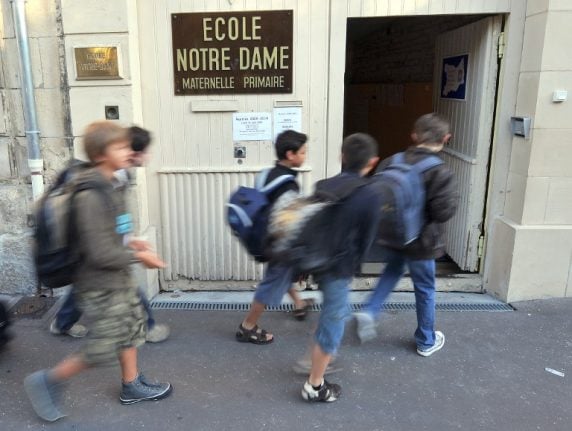 Photo: AFP
If you're a parent living in France, you will have to decide what is the best option for your children's education. But the language factor and perhaps the fact you might not be in France forever add extra complications to the decision.
Do you go for a free French state school or is it better to go private? Do you want your children to mix with other international pupils or would you rather keep things French? There are no right or wrong answers but it's worth considering your options closely before making a decision.
French education used to be considered among the world's best. Today of course that's open to debate. But according to the latest PISA report which rates 15-year-old pupils across 34 countries, France on average ranks 20th out of 32 OECD countries, although its pupils score better in reading and maths than the UK and the US.
Obviously, your choice is personal and will be based on many factors such as cost, location and personal preferences. But the good news – especially if you live in Paris or in other big French cities such as Nice, Bordeaux or Strasbourg which have international schools – is that you probably have the choice of several options. In France, anyone between the ages of 6 and 16 has go to school, although the vast majority of children in France start school in an école maternelle aged 3. (Indeed it will soon become compulsory in France to start school aged 3)

Most parents send their children to the local state schools, which are free apart from the cost of the means-tested canteen and after-school care fees.

For British expat Tracy Thurling, who's lived in France for over 25 years, there was little hesitation when registering her son and daughter for a local French school.

“The kids were born in France and our intention is to make France our home,” Thurling, a wine tour guide in Burgundy told The Local previously. “We felt it was important the children get a total French cultural experience.”

What school your child goes to will depend on where you live as schools are allocated along geographical boundaries.

This is called “la sectorisation” and you can find out which primary schools you depend on by asking your local town hall or by checking on its website.

Secondary school allocation is managed by administrative bodies called “academies”. Each one has a website where you can find out which your local secondary school is. There are different websites for the “collège” (the first part of secondary school for children aged 11 up to 15) and the “lycée” (from ages 15 to 18).

If you haven't yet found somewhere to live, bear this in mind. Some of the best-ranked schools in France in terms of exam results are state-run but, inevitably, they are very popular and are often located in the more expensive areas especially in big cities.

If you want to send your kids to school outside your catchment area, it is possible to ask for another school. This is called a “dérogation”. You must write to the relevant “académie” giving the reasons for your request, which will be granted depending on the places available. Often parents will make their decision on which school to choose based on how well their child is picking up their native language. So, for example, if their English is developing well at home then a free French state school will seem like the best option. Although bear in mind that your child won't learn much English to begin with in a French state school.
If children are struggling to pick up English then parents may decide to pay out for a bilingual school, and there are an increasing number of them that offer places from the age of 3 upwards (More info below). Many French parents are also taking this option, believing it is a good investment if their child can pick up English as early as possible.
In the state system, children are supposed to have grasped some basic words and sentences in English by the end of primary school, but that's not always the case as teachers are not normally trained to teach this.
When they start secondary school, schoolchildren have to take foreign language classes for a few hours a week, and it's usually English. So if your kids are bilingual, they probably won't learn much (but at least they'll get good marks in their schoolwork.)
But there is another option in certain parts of the country, notably the capital, for parents who want their children to get lessons in English but can't afford, or simply don't want to pay out for, private school.
“Sections Internationales”
Some state schools in Paris and in the country's larger cities have international sections called “sections internationales”, where classes are taught in different languages whether English, Chinese, Spanish, German or Arabic or several other languages, depending on what section parents get them into.
In primary school, children there are taught three hours of the foreign language, for example English, each week. You can find a list of all of these primary schools here: Les sections internationales à l'école primaire

In the state secondary schools with international sections, pupils study English literature and History and Geography in English for up to 8 hours a week, on top of all their other coursework. They read the same books as their UK or US counterparts and sit the national UK or US exam board exams in those subjects.

Paris currently has three of these schools: Honoré de Balzac, Camille Sée and Maurice Ravel and there are also a number in the wealthy suburbs of Sèvres, Saint-Germain en Laye and Nogent-sur-Marne. For all of the 'sections internationales' availble in France, see here: Les sections internationales au collège. And what is most attractive about these schools is that on top of the intensive language teaching, the schools are free.
What you might need to bear in mind is that these international sections, especially in Paris, are tough to get into because places are limited. Children will have to pass a rigorous English test (or the language of the international section the child has applied for) to get in. Plus places may be prioritized for those living in certain areas, for example children of families living in Paris have been favoured over those living outside the capital in the city's suburbs.
Plus given that there are only a few of them, you may be faced with transport issues in getting your kids to school on the other side of town. Many families simply end up having to move house to be nearer the school. All these factors need to be taken into account when choosing to go down this route. (Pupils using tablets at the British School of Paris)
And then there are….
Bilingual private and international schools

The other option is to go for a private education. In France, some private schools get state funding and therefore have to follow the national curriculum.

They are called “sous contrat” and are generally quite cheap – although the international sections aren't always subsidised and canteen and after-school care can be more expensive than in the state schools.

Examples of these schools are the Ecole Massillon, a Catholic school in Paris which has British and German sections that run all the way from the last year of nursery through to the end of the lycée, and the Ecole Active Bilingue Jeannine Manuel in Paris which also has a branch in Lille.

Sara Pax, who's originally from the UK but spent decades in the US, decided to put her daughter in a semi-private bilingual school, Ecole International Bilingue Monceau (EIB) in Paris.

“I really wanted (my daughter) to get a solid education in French. I also wanted her to speak English well enough that she could go back to live and work in the States,” Pax said.

Again, these schools are highly sought-after and there is generally an entrance exam so if you want your child to attend one of them, it's best to get in early. And again you'll have to think about moving house if you are already in France.

Other private schools receive no state subsidies and are free to follow their own independent curriculum. They are called “hors contrat” and are obviously much more expensive.

One example is the British School of Paris in Croissy-sur-Seine to the west of the capital, which follows the British Curriculum.

Parents who may only be in France for a set amount of time often choose this option. For her, it was purely practical to enroll her boys in the British School of Paris, where lessons are taught in English. Her family came over to France for her husband's job, and knew they wouldn't be staying long term

“The boys were too old to start their education in France,” she said of her two teenage sons. “We didn't know when we were going back. So we needed to able to slip back into the British education system.”

Also, the boys don't speak French: “It's just a matter of practicality. If you had to learn physics and chemistry in another language you wouldn't understand and it wouldn't be too much fun.”

Other examples of these schools in Paris are the bilingual “Cours Molière” in the 12th arrondissement of Paris, the American School of Paris in Saint-Cloud to the west of Paris and the International School of Paris, under the shadow of the Eiffel Tower, which has built a new campus and believes it will benefit from the “Brexodus” of people whose jobs move from the UK to France after Brexit.