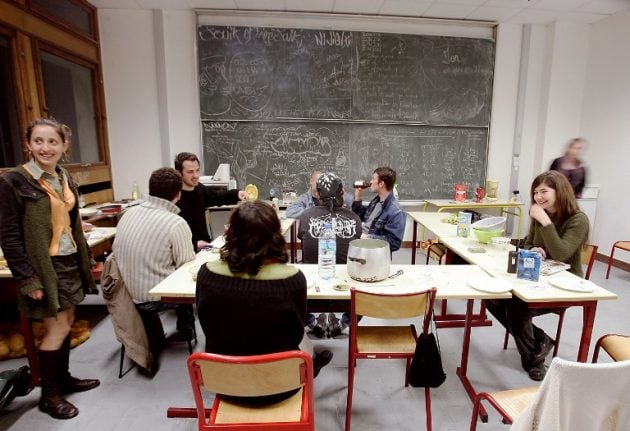 If you are starting school at a French university this year and are worried about what you’ve got yourself in to, fear not.

The Local has crafted a list of essential advice based on interviews with some folks who know what’s what: foreign students who've done Erasmus exchanges and French students who were born into the system.

Questions about paperwork, housing, social life? We've covered it all.

Here are 13 tips for surviving your experience at a French university:

1. Be patient with bureaucracy and administration

Don't expect as much help as you may be used to, says Meredith Ford, who studied at SciencesPo in Paris.

“Be prepared to work independently and receive much less support – your professors and the administration will both expect you to figure things out alone,” she told The Local on Monday.

Bella Roberts, who studied at La Sorbonne, warned students to be prepared to be patient when it comes to administration. “It was a nightmare trying to sort paperwork out,” she said. “You just have to be patient.”

2. Know that it's survival of the fittest

The first thing to note before you unpack your bags is that French universities are heavily oversubscribed. This is the result of the French belief in “the right to higher education but not to a degree.” This means no selection: anyone with the Baccalaureate has the right to go to a French university, but graduation is not guaranteed.

So lecture halls are jammed and administration is slow. This really is a case of survival of the fittest. Selection is made as you progress through your studies – not everyone is expected to graduate, in fact the university relies on drop-outs. This means a lot of work and fairly brutal treatment of those who fall by the wayside… An assembly at the Bordeaux University.

3. Remember that lunch breaks really do exist in France

They can go on for hours. Roberts gave The Local an insight into her time at La Sorbonne. “Sometimes you'd have been there for ages, nearly get to the office and they'd close for lunch. You’d have to start all over again two hours later.”

You might be unaccustomed to this lunch-break culture, but factor it in: embrace it and have a nice lunch yourself.

In Toulouse, another of the students we spoke to noticed the need to be organized when it comes to timetabling and course clashes. There’s no administrative team to sort it out for you.

SciencesPo student Bam Thomas suggested to “join as many Facebook groups as possible”, saying that her university and societies weren't very good at emailing.

“You are completely left to your own devices” added Sophie Hart. “In trying to organize your academic life on arrival, there’s not much support from the university at all.”

5. Be prepared for more class time

You may have lot more lectures than you have at your home university – the French don’t slack off. French students spend at least 20 hours a week in lectures and seminars. Seminars that last until 7 or 8pm are not unheard of. Students at the University of Aix-en-Provence.

6. … and be ready for long classes

You will need to work on your attention span, because classes in France tend to be two to three hours long. Some kinder lecturers might give you a midway break but it’s not guaranteed.

7. And prepare for long exams too

Again, exams are normally longer than you may be accustomed to back home. They normally consist of at least three hours for one big essay question or three to four short ones. There are even some which go on for four to five hours.

The marking scheme goes from one to twenty, ten being the pass-mark. Between nine and 12 is considered average. Don't neglect your coursework because this will often make up a large part of your final grade.

9. Expect to make your friends elsewhere

While in many universities world-wide, students tend to study far from home and stay at the university for weekends, in France, students generally live locally.

Many students will live with their parents and most will already have plenty of non-university friends in the area.

“Most of the people just go there to learn but they don't have many friends” said Olivia de Rodellec, a French student at international business school ESCE. 10. Use classes to meet people

“Try to be tactical and pick modules that have more than one class a week”, said Bella Roberts, “that way it’s easier to make friends”.

It may sound obvious, but make sure you make the most of the contact time you have. “Try to go to as many classes as possible,” said Roberts. “Go to as many other meetings or groups as possible to meet as many people as you can.”

Student Sophie Hart pointed out how helpful Erasmus communities can be in helping you to meet people.

“The Erasmus community is really strong in Toulouse, all thanks to the 'Bureau EIMA' which is made up of student volunteers giving their time to offer integration events for Erasmus students,” she said. “They also offer cheap trips to visit nearby places. That’s another great way to meet people.”

11. Try to live with French-speakers

Student Shoshi Karp-Sawey talked about the benefits of her accommodation with a group of French students in Toulouse: “It was a great way to speak French. Even if it was scary arriving with nowhere to stay, it definitely paid off.” 12. Find extra-curricular activities outside of university

You may find yourself at a loss if you are keen on extracurricular activities. French universities don’t have student unions in the same way British or American ones do. No Harry Potter, Ultimate Frisbee or Surf ‘Soc’ to be seen.

But see this as an opportunity.

Join teams and groups outside of the university – break free from the student bubble. This is a great way to meet more diverse and exciting groups of people.

13. Think outside the box when finding friends

Use networks and sites like MeetUp.com to find groups of people who get together to do whole ranges of different things.

In some cases, the university facilities can be helpful in making friends – notably with sport which is heavily subsidized and can sometimes even be free. Check out the national SUAPS scheme – there should be an office at your university.

Another version of this story was published in 2014