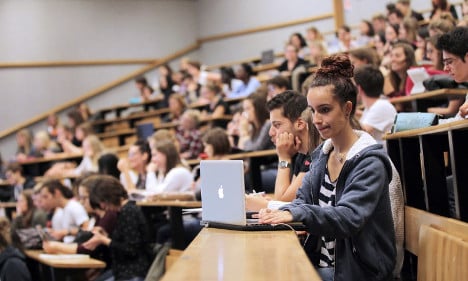 French universities have reason to be happy having beaten the Netherlands to third spot. Photo: AFP
Germany continues to be the favourite among international students at EU universities, thanks largely to its offer being mostly tuition-free and world-class.
This is according to a report by Study.EU, a Hamburg-based company that connects students from around the world with European universities.
Higher learning institutions from thirty European countries were ranked using three main criteria for their classification: Education, Cost, and Life & Career.
According to Study EU, the UK moved up to second place as it is “unbeatable for Education and Life & Career”, but didn’t make top spot because of its “prohibitively high” tuition fees and cost of living.
French universities have reason to be happy having beaten the Netherlands to third spot, and in light of similar studies from previous years that put L’Hexagone rock bottom for international student satisfaction, even more so.
The primary reasons for foreign students in France being previously regarded as Europe’s unhappiest were the high cost of living, lack of student dorms, general disorganization and the absence of courses in English.
But Study.EU puts France in third spot for its “highly reputed, yet affordable higher education system”. According to their findings, France is the 11th cheapest country for an international student, just behind Latvia. The report does stress however that even within the same country, the cost of living and education can vary enormously. Compare completing an MBA while living in central Paris with sitting history at Grenoble Alpes University, for example.
In terms of quality of education, France is ranked fourth behind the Netherlands.
French universities miss out on the top ten when it comes to the Life & Career category, which uses data on English proficiency among the population, the UN World Happiness Index, unemployment for the tertiary educated and personal safety for this ranking.
Study.EU’s report highlights also how Brexit continues to be a concern among educators and students in the UK and those planning to move there soon.
“Compared to last year, there has been a noticeable increase of programmes offered in English,” Study,EU’s CEO Bruno Blöss explained.
“Universities on the continent are preparing for Brexit. They expect European students to seek alternatives to the UK in the coming years.”
This is despite the fact that the EU and the UK have in theory agreed that students should keep equal rights in both domains for the initial post-Brexit phase.