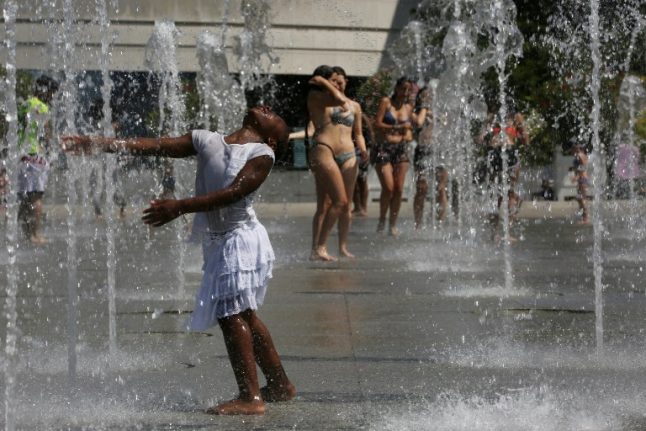 Illustration photo: People refresh themselves in the water of a fountain at Andre Citroen garden in Paris
Parasols and sun cream will be the order of the day across most of France this weekend, although in many places this taste of summer will be accompanied by thunderstorms, according to France's national weather agency Meteo France.
On Friday, the mercury is set to hit 28C in Paris, while in Clermont-Ferrand it will reach up to a scorching 30C. Weather map for Friday afternoon. Photo: Meteo France
Similarly, temperatures in Toulouse and Bordeaux temperatures are expected to reach 29C and it will be 26C in Ajaccio in Corsica.
At the same time a thunderstorm will make its way from the north west of France towards the centre west of the country however generally the weather will remain dry, the weather agency said.

On Saturday temperatures are set to keep on rising, reaching up to 30C in Paris and up to a scorching 31C in Grenoble.
Strasbourg will see the mercury hit 29C, while in Bordeaux in Toulouse it is expected to reach 28C.
On average the mercury will reach 29C in the north of the country and 28C in the south on Saturday afternoon. Weather map for Saturday afternoon. Photo: Meteo France
Meanwhile a few stormy, isolated showers will occur in the west of the country but elsewhere the weather will be mild and largely sunny.
Temperatures are set to remain similarly high across France on Sunday with bright blue skies in most parts of the country, although storms and showers will hit the west and Alps area.