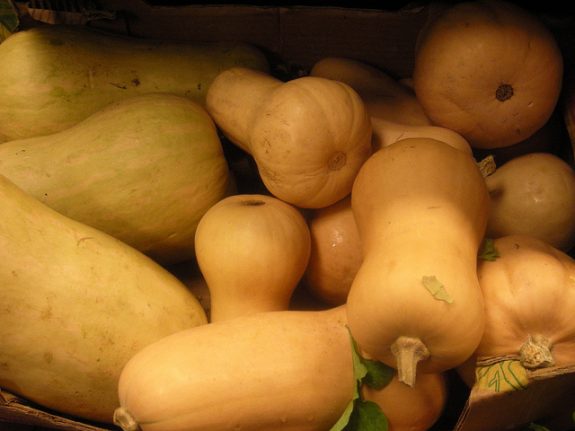 After the woman, named Charlene from Grenoble in south eastern France, swallowed a few mouthfuls of the roasted vegetable, the 30-year-old lost most of her hair.

When Charlène started feeling very sick an hour after eating her dinner around Christmas last year, she thought it was a classic case of food poisoning.

When she began losing clumps of hair a week later, she blamed a new hair product she had bought that day.

“I've never been as sick as I was that night,” Charlène told Le Parisien newspaper.

“One week later, my hair started falling out…nothing my doctor prescribed helped. After a month they were falling out as through I had put on some hair removal cream. When I washed my hair, I would hear a breaking noise, they would break at the root. I was in a total panic,” she said.

But a month after she first fell ill and after most of her hair had fallen out, she didn't know where to turn, until she came across an article in a medical journal about hair loss caused by curcubit vegetables, the scientific name for vegetables from the gourd family such as butternut squash or courgettes.

Luckily, while doing some research about her condition, she stumbled upon the dermatologist Philippe Assouly's article in the journal of the American Medical Association.

“When I saw Dr Assouly's paper, it all fell into place,” Charlène explained. “I got in touch. There was that, and also the fact that my nails were swelling up which confirmed the diagnosis. The toxine attacked my hair follicle. When my hair grew after a week, every strand broke one by one.”

In an article entitled “Hair Loss Associated With Cucurbit Poisoning” published this month, Assouly describes Charlène's ordeal and the case of another Frenchwoman who lost most of her hair after eating butternut squash soup.

Both times, the vegetable had a bitter taste, which means it was probably 'off'.

“These intoxications occur in pumpkins, squash and courgettes which are particularly bitter,” Assouly who works at the Saint-Louis hospital in Paris told Le Parisien.

He said that this bitter taste comes from the toxin called cucurbitacin found in pumpkin, squash and cucumber and that it is probably to blame for the food poisoning which brought on the hair loss. Although such cases are serious, and alarming to those affected, they are rare, he added.

All's well that ends well for Charlène, whose hair has grown back in time for her wedding next month.

But she said that she would like to see more quality controls on vegetables so that no one goes through the same ordeal as her by eating a butternut squash that has passed it sell-by date.