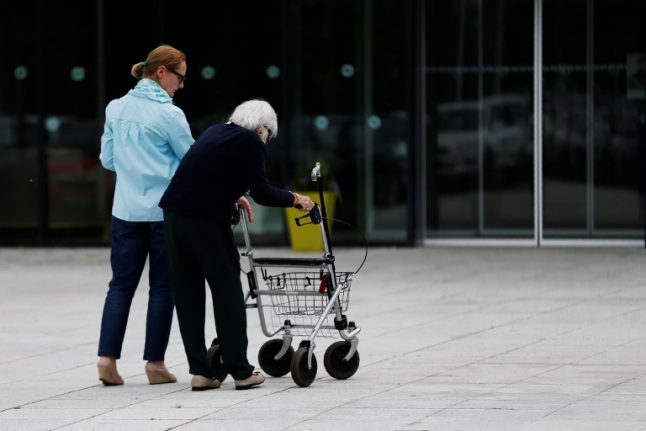 France has a reputation for being one of the best places to grow old, in part due to its high quality of life, excellent health care and having one of the world’s longest life expectancies.

But while France may be considered a good place to retire to for foreigners, if a new report is anything to go by, the elderly in France don't have such a good time in their dotage.
The report by France's National Ethics Committee (CCNE) reveals that reaching old age in France often means being sidelined by society, receiving inadequate care and the suffering of both you and your carers.
There are 6.1 million people aged over 75 in the French population, 61 percent of whom are women. Among this number, 25 percent live alone, 50 percent no longer have an active friendship network and 41 percent have little or no contact with their children.
Added to this is the problem that many have lost their independence against their will.
“There are about 7,000 Ehpad (nursing homes) in our country, which host 500,000 to 600,000 people, 70 percent of whom have lost their autonomy,” said professor Régis Aubry, a palliative care physician and one of the people behind the report, adding that these figures demonstrate the scale of the problem.
READ ALSO: These are the 'best cities in France' for growing old in He added that three quarters of the people living in nursing homes have not chosen to be there and often don't like living among other elderly people.
In fact, the sense of being in these homes against their will, could go some way towards explaining why 40 percent of them are depressed, according to the report.
The CCNE says that “the institutionalization, or even ghettoisation” of the elderly — as a means of ensuring their safety — is in many ways a denial of what it's like when older people live together.
In an attempt to explain this problem of sidelining, the committee points to “a collective denial of what old age is — the end of life”.
Jérôme Pellissier, a psychologist specialising in mental healthcare for the elderly, told French newspaper Liberation: “Our society gives a large part of the population the feeling that they are a burden” which adds to older people's feelings of isolation and loneliness.
READ ALSO: 'You're bleeding us dry': Why France's pensioners are furious with Macron Evolving the model
Alain Villez, president of the French charity Les Petits Freres des Pauvres which helps those over the age of 50 suffering from issues such as loneliness, illness and isolation told The Local that one of the problems in France was that, “people have too high an opinion” of institutional care despite it being the most expensive way of looking after the elderly.
“People end up losing their independence when they are put in nursing homes and these places are ones of exclusion and relegation,” he said.
Instead Villez recommends using more modern solutions such as inter-generational housing — for example when students take up a spare room in the home of an elderly person in order to help combat loneliness and intermediate housing, which allows the person to live autonomously while having easy access to residential services.
He also suggested that more effort should be put into updating people's homes in preparation for when they reach the age when they need extra help — although this is something many don't want to deal with when they are younger.
“Leaving the current model will be hard but I have hope that things will start to evolve,” he said. Photo: AFP
The philosopher and psychoanalyst Cynthia Fleury, who worked on the report, told Le Point that artist studios could be another way of limiting the feeling of isolation among France's elderly.
The CCNE also suggests a change in law that would enable a loved one to help and accompany a sick or disabled person into residential care.
According to a recent Insee report, France needs to double the number of available beds by 2050 in order to meet national demand, adding that the public authorities will need “to prioritise the development of assistive equipment for the home” in a bid to increase people's chances of staying in their own homes for longer.
In 2014 The Local reported on a global study that showed pensioners have a better quality of life in the US and the UK than in France.
On the Global Age Watch 2014 index list of 96 nations, France came 16th, compared to Britain which came 11th and the United States which was ranked eighth.
In that study France performed the strongest in the area of “income security” (second in the world) but it was revealed to have one of the lowest poverty rates among the elderly.
In 2016 alone, 676,000 people retired and of France's total of 16.1 million retirees receive a pension of €1,294.