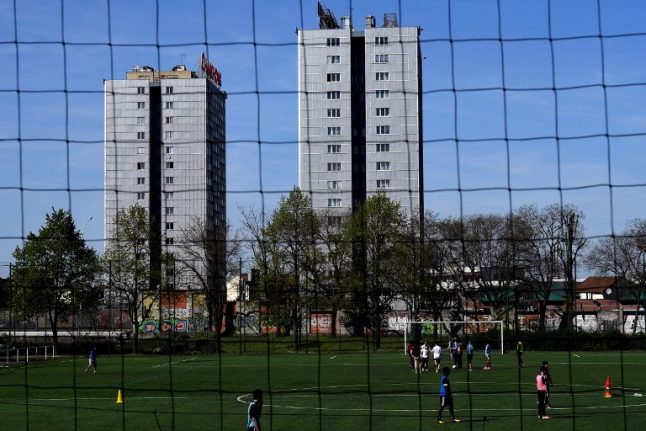 Two public housing (HLM) buildings named "Boute-en-train" are pictured on April 17, 2018 in Saint-Ouen, in the northern suburbs of Paris. Photo: AFP
Macron's plan for improving the lives of around five million people in 1,300 poor neighbourhoods, including the high-rise, largely immigrant suburbs of Paris, had been keenly awaited.
From creating more places in daycare centres for children from poor families to giving youngsters internships in big French companies, he pledged a change of tack to “emancipate” inner-city and suburban youth.
But the announcements, which came with no funding attached, fell far short of the mark for opposition parties, local officials and media.
The leader of the main opposition Republicans (LR) party, Laurent Wauquiez, told LR lawmakers that Macron was the champion of “Kodak politics” focused on
image-making which consisted of “talking and doing nothing”.
The mayor of the Bondy suburb in Paris, Sylvine Thomassin from the opposition Socialist party, said she was “disgusted” by the speech, accusing Macron of making a show of “breaking down doors that were already open”.
READ ALSO: She and other mayors took particular exception to Macron's repeated swipes at how previous governments had failed to solve the problems of ghettoised communities, which they saw as smearing local officials.
“I felt insulted by the president, it was simply unbearable. Let him come here and live our lives for a few days and we'll talk again,” she said.
In his speech at the Elysee Palace, 40-year-old Macron stressed that he had no plan for a costly grand new strategy which he said was an old approach that
was as “old as I am”.
Instead, he outlined a series of smaller initiatives, some of which had already been announced, such as a modest increase in police numbers and extra resources for schools in deprived areas.
The left-wing Liberation daily was scathing.
“When you set a goal of doing nothing, in general, you succeed: mission accomplished,” it said in an editorial.
The Bondy Blog, a well-read website dedicated to France's storied “banlieues”, accused Macron, who has been labelled the “president of the rich”, of failing the poor.
“What strategy and policy for the France's poorest territories? Answer: N.O.N.E,” it wrote.
'Mission accomplished'
During campaigning for president, Macron vowed to liberate young people trapped in a cycle of poverty, underachievement and unemployment in crime-blighted suburbs, some of which have become recruiting grounds for radical Islamist groups.
But during his first year in office he was accused of giving scant attention to the poor.
Last month, a former minister tasked with coming up with a plan for the “banlieues” submitted a report proposing 19 programmes, with a price tag of 5.0 billion euros ($5.9 million).
Macron, who is on a cost-cutting drive, appeared Tuesday to have discarded several of those proposals. Photo: AFP
Stephane Gatignon, a crusading former mayor of the Sevran area north of Paris, said he was disappointed.
“There was not much in it,” said Gatignon, an ecologist who went on hunger strike in 2012 to request more funding for deprived areas.
Far-right leader Marine Le Pen accused Macron of skirting the issue of radicalisation.
“Barely a word on immigration, barely a word on Islamic fundamentalism. But we know perfectly well that these problems are partly the source of the difficulties in the suburbs,” she said.
Macron did win praise from some attentive listeners, however, who picked up a tribute to French rapper Oxmo Puccino in the conclusions of the president's hour-and-a-half speech.
Referring to mothers from “Ouagadougou to the far end of Peru”, Macron quoted from Puccino's 1998 rap anthem Mama Lova.
By AFP's Clare Byrne