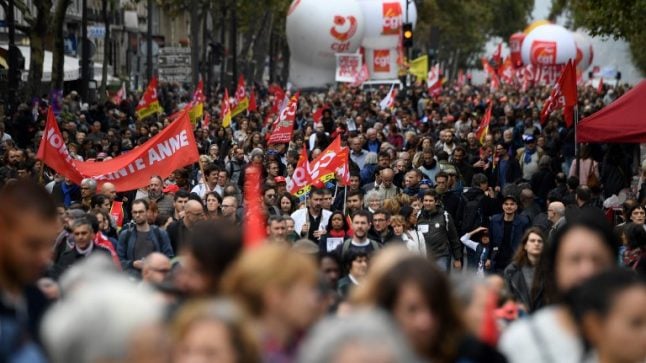 File pic: People take part in nationwide strikes in October. Photo: AFP
The stoppages are part of a series of demonstrations by public sector employees against Macron, who has pledged to reduce public spending, trim jobs and overhaul large parts of the vast French state.
All unions representing civil servants have backed Tuesday's strike, a rare show of unity which was last seen around 10 years ago.
Their walk-out, which will affect schools, public kindergartens, flights and some energy infrastructure, is the third stoppage since Macron's election in May 2017.
“Thanks to the civil service, all of the unions in this country will be together,” said labour leader Bernadette Groison from the FSU union. “That shows how high the stakes are.”
The centrist government plans public sector reforms next year which would lead to the greater use of contract workers for some state services and a cut of 120,000 jobs by 2022 out of 5.6 million.
Many civil servants fear that the government plans to scrap their special status and job-for-life privileges, a measure that has already been announced for new recruits on the state railways, the SNCF.
READ ALSO: That move on the railways, though generally supported by the French public, has sparked one of the longest strike sequences ever on the network which began at the beginning of April.
Workers have been downing tools every two days out of five since April 3 and will begin a new round of stoppages on Tuesday which has seen high-speed services and commuter trains badly affected.
But Macron has vowed to be uncompromising and promised to deliver on his rail reform promise and cuts to France's public spending, which was part of his election manifesto.
France has one of the biggest public sectors in Europe relative to the size of its economy and the country has not balanced its budget since the 1970s, leading to a public debt equivalent to nearly 100 percent of GDP.
But unions accuse Macron, a former investment banker, of wanting to destroy public services which are a vital source of employment and a pillar of communal life in many areas of the country.
Around 130-140 demonstrations have been organised by civil servants on Tuesday with unions hoping turnout will be higher than the last day of action on March 22 when an estimated 300,000 gathered nationwide.
These are the workers expected to join in the protests:
Education
Public creches will be disrupted by the day of action, with restricted opening hours and partial or total closures.
The main union for nursery and primary school staff, the SNUipp-FSU, expects participation to be equivalent to that of the last day of protest on March 22nd when about 20 percent of staff went on strike.
There is likely to be less participation among those working in colleges and high schools because several Tuesdays have already been missed and they are currently in the middle of revision season, Frédérique Rolet, Secretary General of the SNES-FSU told the French press. File pic: Striking public sector workers in October. Photo: AFP
Transport workers
While rail workers aren't officially striking until Wednesday and Thursday, the Sud-Rail union which has filed for an unlimited strike notice, has called on its members to join the public service workers on the day of protests.
Air traffic controllers are also joining the action, calling for more manpower as air traffic rises as well as better working conditions. France's Directorate-General of Civil Aviation (DGAC) has recommended airlines to reduce their flight program to Orly, Lyon and Marseille by 20 percent.
On the roads, the FO transport and logistics union, which is also threatening to call a strike on June 3rd, is calling its workers to join Tuesday's action to support “without reservation” the struggles of public workers and railway workers.
Energy
The four unions representing energy workers — the CGT, CFE-CGC, CFDT and FO — have called on members to join in the strikes and protests to take a stand against the threats to their employee status.
If enough workers join, there may be a decrease in electricity production or even power cuts.
Health and social services
Large numbers of hospital and social services staff are expected to join the protests to demand better working conditions and more jobs in the sector.
However, precautions have been taken to ensure that the healthcare sector runs as normal throughout the day.
Other public services
On the back of rumors about the possible loss of 4,000 jobs over the next three years, the Pôle Emploi (job centre) staff have been called on to strike by eight unions who consider it “inconceivable to cut jobs even though we are unable to support all jobseekers”.
Staff at France's national weather agency, Météo-France, are also set to join the protests to voice their opposition to job cuts.
On top of that, postal workers and cultural and public broadcasting employees will also be on the streets.