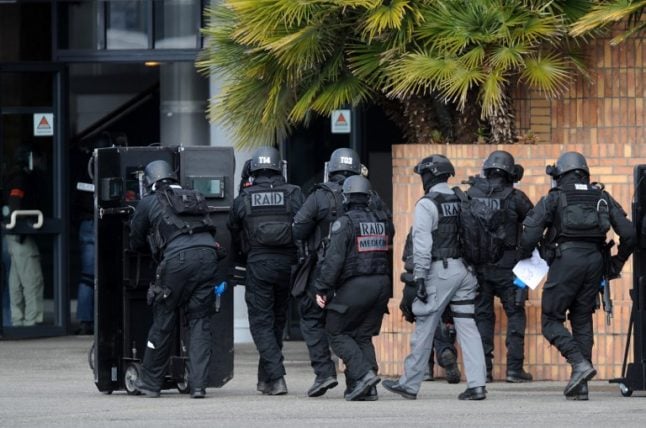 French police take part in a drill in Pau in 2017. Photo: Iroz Gaizka/AFP.

A 32-year-old was murdered early on the evening of Friday May 18th in a notorious area of the town by a group, whom witnesses described as being in their early teens and aged 16-17 at most.

The victim, who had a history of violent crime and drug dealing, was repeatedly kicked and punched by a group of up to 12 teenagers, and was also beaten with a plastic chair leg and a piece of wood in front of horrified witnesses, local media reported.

Pau prosecutor Cecile Gensac confirmed on Monday May 21st that three people had been arrested over the murder — a French national born in Burkina Faso in west Africa who had moved from Paris to Pau in recent years.

“The man died Friday in the street in an area of Pau after a group attacked him,” she told AFP.

The housing estate in Saragosse, where the crime took place, is known for its high crime rate and is typical of many deprived, high-immigration urban neighbourhoods in France.

But murders committed by minors are rare and man's death on a grassy public area was widely reported on Monday, with Le Parisien newspaper describing it as a “terrifying lynching.”

Elsewhere in France, 10 people have been arrested in the gang-plagued Seine-Saint-Denis area northeast of Paris after a 41-year-old man was stabbed to death on Sunday night in a shop.