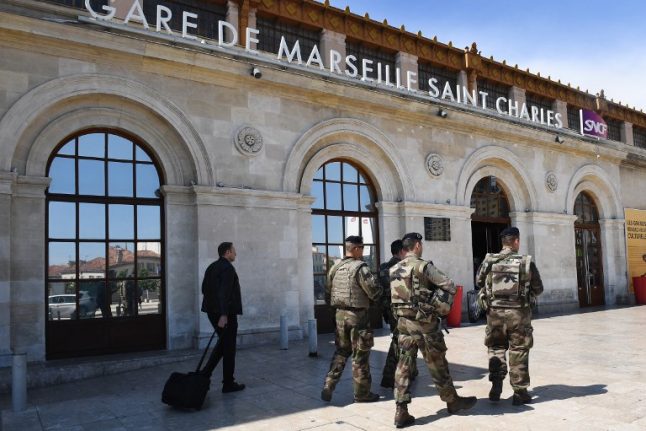 French soldiers patrol outside of the Gare Saint Charles train station in Marseille on May 19, 2018 after it re-opened. Photo: Boris Horvat/AFP.

The suspect, who had claimed he was Chechen and spoke Russian, was detained at the main railway station in the southern city on Saturday after a woman reported him to patrolling anti-terror troops, saying he was acting strangely.

The station, a major transport hub, was shut down for four hours on Saturday while it was swept by explosives experts.

Prosecutor Xavier Tarabeux revealed that the man being held in custody on suspicion of preparing a crime is a Bulgarian national. Police had found the electrical equipment on him.

France has been on high alert after a Chechen-born Frenchman stabbed a man to death last week and wounded four others in an attack in Paris claimed by the Islamic State group.

It was just the latest in a line of jihadist attacks in France that have killed more than 240 people in the last three years.

Police and prosecutors said they were interrogating the man arrested in Marseille to ascertain whether he was planning an attack.

The city's mayor Jean-Claude Gaudin issued a statement saying an attack had been “foiled” and that the suspect had “obvious terrorist intentions”.

But the case has yet to be handed to anti-terror prosecutors in Paris, as is customary in major cases of thwarted attacks.