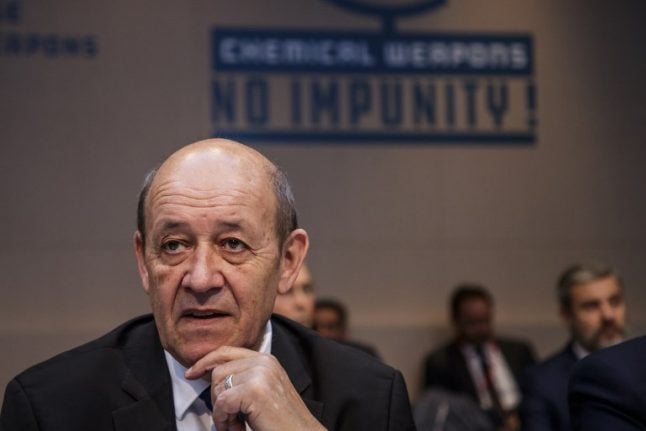 French Foreign Affairs Minister Jean-Yves Le Drian at a meeting on the International Partnership against Impunity for the Use of Chemical Weapons in Paris on Friday. Photo: Christophe Petit Tesson / E
The asset freezes came as officials from some 30 countries met to discuss how to better identify and punish those who use nerve agents, which Western powers say have been employed not just in the Syrian war but the poisoning of an ex-Russian spy in Britain in March.
“We are sending a clear message: there will never be impunity for those who gas fighters or civilians,” French Foreign Minister Jean-Yves Le Drian said after the meeting.
British Foreign Secretary Boris Johnson added: “We need a new mechanism to identify not just the fact of the use of chemical weapons, but to identify the perpetrators.”
Earlier France announced asset freezes against nine businesses including Sigmatec and the Al Mahrous Group, both based in Damascus; Technolab in Lebanon; and a trading company in Guangzhou in China, in a list published in the government's official gazette.
Two Syrian nationals will also face asset freezes as well as a person born in Lebanon in 1977 whose nationality was not given.
In a statement, Le Drian and Economy Minister Bruno Le Maire said the individuals and businesses were working with the Syrian Scientific Studies and Research Centre (SSRC), which they described as Syria's main laboratory producing chemical weapons and ballistic launchers.
In January, France sanctioned 25 people and companies based in Syria, and also French, Lebanese and Chinese citizens, over suspicions of fuelling the development of chemical weapons in the war-ravaged country.
Aziz Allouche, the owner of Technolab, told AFP that his company supplied only universities, schools and professional education centres with electronic and industrial gear such as spectrum analysis equipment.
“I'm surprised by this news, I don't work with France,” Allouche said. “If they want to question me, they're welcome.”
Technolab and Allouche are also among several companies and individuals whose assets have also been frozen by US officials over suspected support for Syria's SSRC.
“All my business involves the civil sector. But the equipment I provide can be used for either civil or military purposes,” Allouche said. “If I supply a university and they use it for something else, how is that my fault?”
Meeting in Paris
After hundreds of people were killed in chemical attacks near Damascus in 2013, a landmark deal with Russia was struck to rid Syria of its chemical weapons stash, staving off US air strikes.
Despite the deal, a suspected chlorine and sarin attack in the Syrian town of Douma on April 7 this year triggered punitive missile strikes against alleged chemical weapons facilities in Syria by the United States, Britain and France.
Sites operated by the SSRC were among those targeted in the strikes, according to the Syrian Observatory for Human Rights, a monitoring group.
The Organisation for the Prohibition of Chemical Weapons is due to soon release a fact-finding report into the suspected Douma attack.
The poisoning in Britain of former Russian double agent Sergei Skripal — who was finally released from hospital on Friday — has also sparked a diplomatic stand-off between Russia and Western powers, which see the hand of Moscow behind the attack in March.