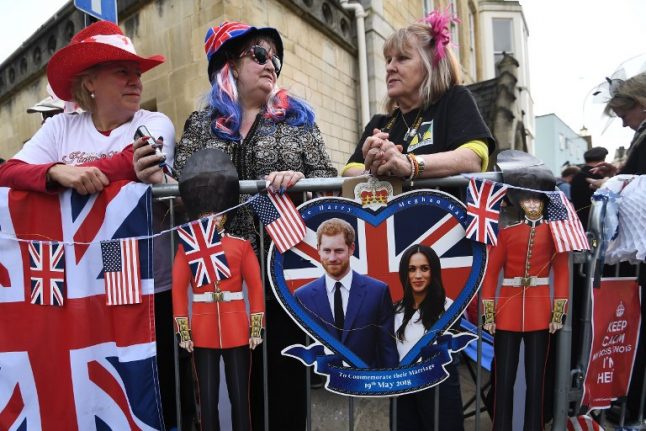 Even with the ongoing rail strikes and student protests one story has dominated the news sites and TV stations in France this week: the Royal wedding.
The much anticipated marriage between Prince Harry and Meghan Markle that will take place on Saturday has gripped France or at least its media.
The 24-hour news channel BFM TV has had an advert in the corner of screens counting down the days to the big day. It has  promised viewers Saturday's coverage will be dedicated to the Royal wedding. This is almost on par with other well-known UK and US networks.
Even newspaper Le Figaro has been caught up in the coverage, sending out a breaking news alert on Friday that Prince Charles would be walking Meghan Markle down the aisle.
A similar hysteria gripped France at the birth of the Royal baby George back in 2013 when even then-president François Hollande sent a message of congratulations to William and Kate.
Two years earlier in April 2011, some 5 million French people tuned into France 2 when Prince William and the Duchess of Cambridge exchanged “I do's”, according to the French press. Millions more French people are likely to watch the coverage on Saturday.
While Brits are forgiven for revelling in patriotic fanfare, and Americans get a pass due to the fact that an American actress will be marrying into the British Royal Family, why are the French so invested, especially when we consider the fates France’s last King Louis XVI and his wife Marie Antoinette met at the hands of the revolutionaries in 1789?
There are several elements that could explain the enthusiam, according to the experts.
Firstly growing up, the French have been exposed to coverage of the royal family throughout the years so the public are very much aware of who the members of the royal family are, and apparently, Harry in particular.
Catherine Ivanichtchenko, head of information at weekly magazine Voici said “there is a real interest for Harry, he is one of the favourite personalities of the royal family, because he’s funny and easy going and well, cute.”
Also, one of the most plausible reasons for France’s captivation with the wedding is the fashion angle to the story. Style is something the French have often tried to emulate with their presidents and more so with their first ladies, paying close attention to their fashion sense.
So there’s obviously much interest over THE DRESS!
For example France's Vogue Paris magazine has covered every angle of the dress, from the very first images of Meghan Markle in a dress, a compilation of still photos taken from the final episode Markle filmed for her hit series Suits where she marries her love interest, to 7 designers that Meghan Markle could choose for her dress.
Recent popular TV series have also played a role in boosting interest in the royals among a French audience.
The original Netflix series The Crown which portrays Queen Elizabeth's reign and another period drama, Downton Abbey, depicts the lives of an aristocratic family were both highly popular in France.
French Journalist Nicolas Domenach who reviewed The Crown for French radio network RTL said that “if the proof of the pudding is that we eat it, the proof of our passion for the British monarchy is that we enjoy it.”
Domenach says part of France's obsession with the British royals can been explained by the fact their own royals succumbed to the guillotine so long ago and many are still a little wistful about times gone by.
“English royalty serves to maintain the unity of the country. It has immense symbolic power, but no concrete power,” says Domenach.
“This monarchical permanence in this democracy fascinates us because we cut off the head of our king and our queen. We are proud to have accomplished our Revolution, but we maintain a nostalgia, if not a remorse.
“Look how Emmanuel Macron, our Republican monarch, goes to the Palace of Versailles almost every week, and takes his holidays in the Chateau de Chambord,” he said.
Speaking previously Stephane Bern, an expert on all things royal, told French radio RTL that royal families are like “key stones” that act like “cement” in keeping a country together.

He believes the French are fascinated by royalty because the country lacks this “cement” and says the role of the French president needs to be better defined.

“We ask our president to be both king and the prime minister. It’s very complicated,” he said. Citing a famous quote from former President Charles de Gaulle, Bern said: “The French have a taste for princes, but they will always look abroad.

If you happen to be based in Paris and wish to hop on the Royal Wedding bandwagon, you can check out these English pubs that are said to be streaming the live event.
By Lina Agabani Puch