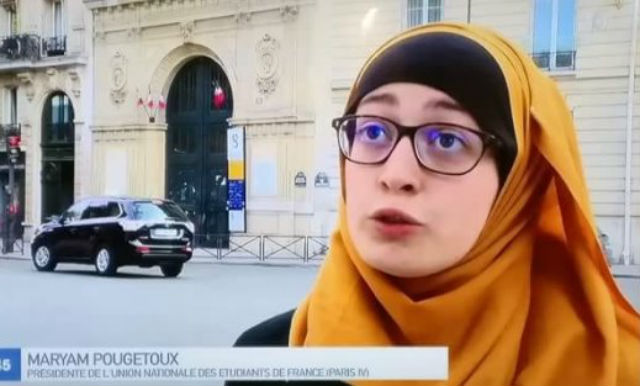 The outcry began when student Maryam Pougetoux, the president of one of the Paris branches of the UNEF student union appeared in a documentary for the channel M6 about the ongoing student protests in France.

It wasn't anything she said that caused uproar on social media and in the political world for the following week, but the fact she was wearing the hijab, the Muslim veil that has been banned in schools and public buildings since 2004, but remains legal in public places and notably universities.

While much of the abuse and anger was naturally vented on social media it wasn't long before French politicians got involved.

The latest was Interior Minister Gerard Collomb who said he was “shocked” by the sight of the student wearing a veil.

“You have to set an example,” said Collomb, who described it as “proselytism” (the act of trying to convert someone to a religion) and said it could be interpreted as “provocation”.

Equality Minister Marlene Schiappa described it as “a form of promotion of political Islam” saying UNEF “is supposed to be a progressive student union.” She said the veil was “proof of being trapped by a religion”.

The student union hit back at Pougetoux's critics saying she was the victim of “racist, sexist and Islamophobic hatred.”

Sociologist and documentary film maker Agnes de Feo, who has studied women in France wearing the veil, says the reaction this week, just like the burkini furore two years ago, is completely “irrational”.

A new controversy has stirred up France two years after the burkini bathing suit ignited the public all summer. And once again it is the Muslim veil that angers a big part of the French population.

Maryam Pougetoux, the president of a local student union has stirred up anger around France because she appeared on television wearing the veil. The reaction has been close to collective hysteria and again shows there is a large rejection of Islam among the French population, which is openly exercised against practicing Muslims, who are still considered as outsiders living among the French. But why does it happen?

In France the Muslim veil creates a hatred among people that is also present among the political class. It is taken as a sign of the refusal of gender equality and also a demonstration of rampant Islamization. Just look at the words of the minister Marlene Schiappa, the Secretary of State for Equality, who considers the veil as “a form of promotion of political Islam.” For the majority of French people, women wearing the veil are alienated, submissive to their husband or a man in their family, having lost all of their free will. This notion of the constrained woman is a myth used to justify the vehement criticism of the veil under the “noble” pretext of wanting to release these women.

Each person or politician has their own interpretation to dismiss women who wear the veil and who are the subject of contradictory stereotypes because they are also considered by others to be proud and contemptuous propagandists of Islamisation and who are not French but enemies of France from within, permanently suspected of wanting to damage the interests of the Republic.

They are labelled with all kinds of character faults from willing passiveness to a cunning desire to take power. They have become the female pariahs of society, outsiders who are not allowed to speak their minds.

The detractors of the veil are used to invoke France's 1905 law on secularism. Yet contrary to common thinking, secularism protects veiled women. The veil is only prohibited to public service workers, school pupils and the employees of certain businesses.

All the parliamentary bills aimed at banning university students from wearing the veil and mothers who accompany their children on school trips have floundered. Secularism tolerates the expression of religion in the public space. So wearing the veil in everyday life is perfectly secular.

Hatred and mistrust of veiled women is irrational. It is similar to grossophobia (sizeism) and homophobia. These prejudiced groups have the common point of transgressing the norms of gender and the aesthetics of the body as it is now fixed.

The approach taken by veiled women should be understood as a reaction against consumer society. So while it is mistakenly taken as a constraint, the veil is used by women to turn away from other constraints: those of imposed beauty and obligatory slimness to have a different relationship with the body.

Through their veil, they unveil the self-conditioning of modern women who mistakenly believe they are free. It offers them a way out of the physical diktat that concerns almost all women in the west.

It is also a resistance to the commercialization of the female body in advertising and especially the pornography industry which degrades the image of women. These women are actually far more self-aware than the society around them.

What if these veiled women were actually hated because they reveal to the French their own neuroses towards femininity?

Agnes de Feo writes regularly for Slate magazine in France. Some of her articles can be read HERE.