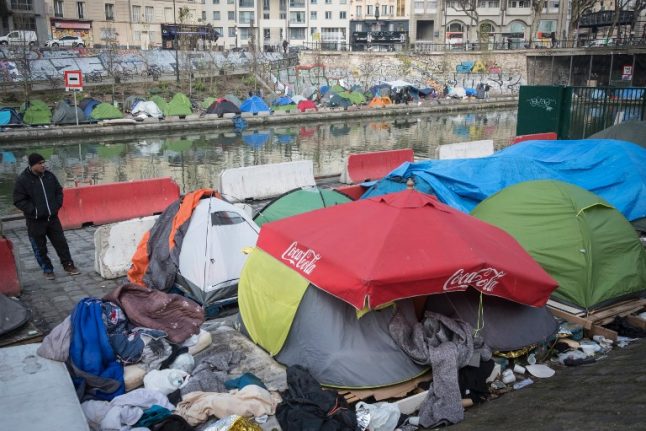 Photo: The Local/Lina Agabani Puch
Around 1,600 migrants, mostly from Sudan and Eritrea, have constructed makeshift shelters under an overpass in the northern Villette area — one of the largest camps in the French capital since the surge in arrivals to Europe beginning in 2015.
An additional 600 people, mainly Afghans, are sleeping in a tent city along the trendy Canal Saint-Martin.
In summer the banks of the Canal St Martin are usually packed with young revellers enjoying a drink and picnic by the water but now the tents stretch down the towpaths from Jaures Metro, until the metal fences which have been erected to prevent the camp spreading.

The tents along one side of the canal are mostly occupied by Afghans, while on the other side there are mostly Africans from Senegal, Ghana, Mali, Nigeria, Mauritania and Cote d’ivoire.

He travelled from Afghanistan to Pakistan to Iran to Turkey to Bulgaria to Serbia, and then hopped on a truck to France.

“It’s very bad here. I have no bed no food and no shower and it’s very cold at night,” said Jabar who says his parents encouraged him to make the journey and ask for asylum.

When asked if he regrets the journey though, he says no. “Here there are no bombs.” Jabar says he seeks schooling, work, and a better life in France

Samsour, aged 19 and also from Afghanistan has been in France for the past three months after travelling through Pakistan, Iran, Turkey, Greece, Serbia, Hungary, and finally Germany where his demand for asylum was rejected.

His asylum demand was also rejected in France and he now plans on going to Calais to try his chances in England. Samsour says all he can do is continue trying. He wants to write a book about his story.

Sierra, a 19-year-old from Senegal has been in France for the past 3 months after travelling through Mali, Algeria, Libya and Italy.

“You call the asylum offices, but agents don’t take your call. I keep trying but the lines are always occupied.”

He says that even when they accept someone’s request for asylum, such as the case for his friend, you’re not given housing, and are left to live by the canal.

“I left after my parents died. I tried living with my aunt but there were too many family problems,” he said.

Sierra thought he would come to France and continue his studies in law.

“I regret coming here now. Not just sometimes, everyday I regret it. I sleep on the floor. At least back home I had a little roof over my head,” he said.

“I saw on television that France was this country of fraternity and liberty, but I come here and I’m left to this camp where there is always fighting and problems.

A fight broke out between an Afghan and some of the Africans after a member of the public began handing out food. Each group accused the other of taking too much food or keeping it to sell on later. 'Unlike any we've ever seen in Paris'

Louis Barda of Medecins du Monde (Doctors of the World) said this week that “the situation is increasingly alarming,”, calling the Villette camp “unlike any we've ever seen in Paris”.
While two doctors nearby were treating patients as others washed their clothes in the nearby canal, a young man suddenly began convulsing, AFP witnessed on a visit to the camp.
The seizures stopped a few minutes later, but the man was muttering gibberish with a panicked look on his face. He refused to go along with first
responders for treatment.
“He probably took some drugs,” Barda said, adding that he and his colleagues had noted “more and more addictions” at the site.
Tensions “have clearly gotten worse over the past two weeks,” he said, citing people who have needed treatment “after being hit with iron bars, people with gaping wounds, knife cuts”.
On Sunday a Sudanese man was seriously injured during a fight, while a young Afghan drowned in the Canal Saint-Martin last week.
Another migrant's body was also fished out of the canal near the “Millenaire” camp at La Villette (see pic below).
Meanwhile volunteers are grappling with an outbreak of respiratory and skin conditions such as scabies in the squalid, tightly packed camps.
“The security and health of the people living in these camps, but also of members of aid associations and local residents, are no longer assured,” according to a petition signed by more than 30 aid groups, released Thursday. 'Knife in the stomach'
“I've been here about two weeks,” said Ahmad at the Millenaire camp. “It's so difficult, at night it's so cold, no good food, no washing — it's a terrible time.”
“Three or two days ago I saw one person, someone hit him with a knife in the stomach,” he said.
Aid groups say the camps have attracted smugglers from the port city of Calais, offering them a chance to reach Britain — where many migrants believe it would be easier to find work and potentially asylum.
But “if you want go to England you have to pay 1,000 euros ($1,180). It's too expensive!” said Beniam, a 26-year-old Eritrean, who says he prefers France because of its “schools and jobs”.
“Their days are reduced to finding food, toothpaste or soap, to washing their clothes. They're stuck in these camps and unable to imagine anything else,” said Alix of the NGO Utopia 56, declining to give her full name.
“What's happening here is also because the state isn't accepting its responsibilities, so citizens and associations have to pick up the slack,” she said.
Paris Mayor Anne Hidalgo has called on the government of President Emmanuel Macron to find shelter for the migrants, only to be told that unless she wants government forces to evacuate the site, the problem is hers.
The impasse has led to a series of calls for urgent action, with senior Paris priest Benoist de Sinety denouncing “a total absence of humanity”.
“If you let the camp get bigger, you're leaving them exposed to smugglers,” said Barda of Medecins du Monde.
“They'll do their deals and maintain the trafficking, fuelling all the tensions we're seeing today.”
by Lina Agabani Puch/AFP