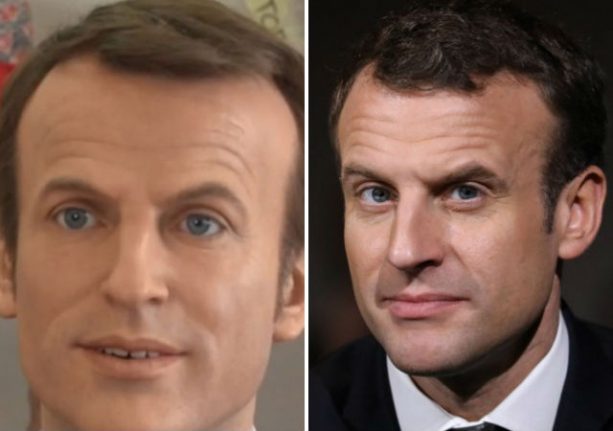 Photos: Screenshot Sept a huit/ AFP
Twitter users compared him to an android or the killer doll Chucky from the “Child's Play” slasher movies, while one wit said the only thing they got right was his ubiquitous solid-blue tie.
Since then museum directors have admitted their Macron is not quite as flattering to the 40-year-old French president as he deserves.
“A tense and anguished face, a frozen statue that doesn't 'live', this is not beautiful, something just doesn't work,” Grevin's director, Yves Delhommeau, told AFP on Wednesday.
“Emmanuel Macron's statue has not yet been approved, I don't want a figure so heavily criticised on social networks,” he said.

The museum, which has nearly 800,000 visitors every year, is still evaluating if the statue can be saved with retouching, or if they should just start over and cancel the planned unveiling for May 24.
Producing a Grevin sculpture takes six months and costs 50,000 to 60,000 euros ($60-70,000) — though the museum rushed out its Donald Trump just two months after his election caught officials by surprise.
Delhommeau cautioned that the image of Macron bouncing around Twitter was based on a photo taken during a television programme filmed last September, and that certain elements had been changed since.
He also said the museum had been unsuccessful in trying to persuade the French leader to have his face scanned for the work, meaning artists had to work off photos.
“We succeeded with Donald Trump, there was no reason to think we couldn't do the same with Emmanuel Macron, even though more distinctive faces, older and more exaggerated, are often the easiest to do,” Delhommeau said.
Macron's wife Brigitte has not authorised the museum to make her statue, and “after what's happened with her husband, this probably isn't going to bring her around,” he admitted.