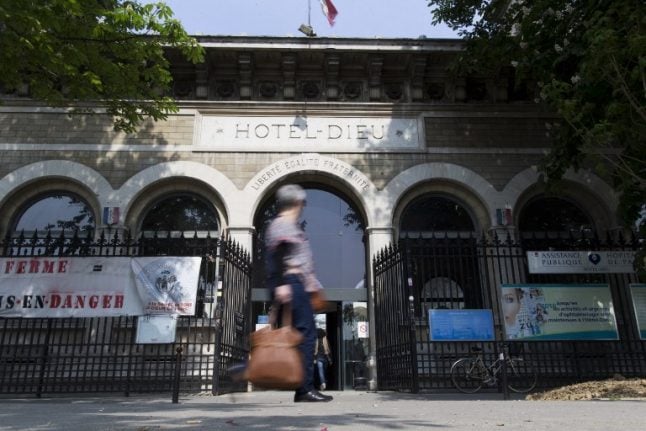 Hotel-Dieu hospital in Paris. Photo: AFP
The number of CCTV cameras will increase by 40 percent over the next three years in order to cope with the overwhelming incidents of aggression faced by people working in the French capital's 39 public hospitals and the damage to hospital resources.
“We are taking the next step with video surveillance,” Martin Hirsch, director of the city's hospitals authority AP-HP told Le Parisien on Wednesday.
Hirsch said the cameras would cost about €30 million or “the equivalent of a small building”.
In 2016, there were 4,302 so-called “undesirable situations” in public hospitals in Paris, according to a study by France's National Observatory of Violence in Healthcare (ONVS). That compares to 3,282 in 2015.
About half of these situations involved violence or insults against staff members, while the other half involved damage to the hospital itself, including the destruction of valuable medical equipment.
According to the AP-HP the CCTV cameras will work as a visible preventative measure, help find and identify the people behind the crimes and help security guards intervene more quickly in the event of a fight.
These cameras will only be installed in passages and in waiting rooms — there is no question of having cameras in the corridors where people are often laid out on beds.
There are also plans “before the summer” to test advanced CCTV cameras that will be able to “detect fights and suspicious packages, as well as react to a patient falling or disappearing, if they suffer from Alzheimer's, for example”, Hirsch said.
According to the AP-HP boss, it will be the first time these cameras, currently used mostly in airports, will be tested in the field of health.