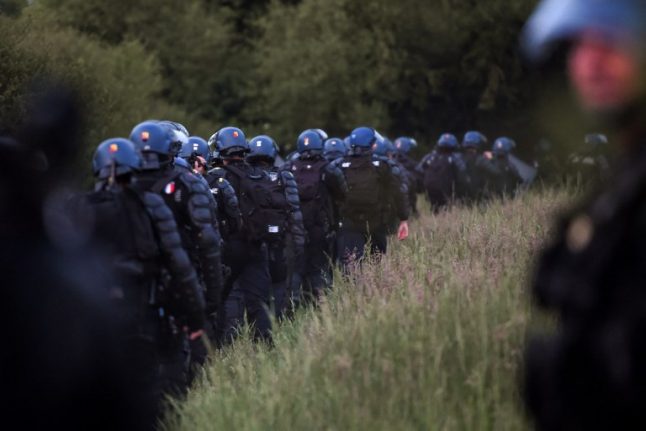 An initial operation last month to clear the demonstrators from Notre-Dames-des-Landes in western France prompted days of furious clashes between the two sides in clouds of tear gas.

The government had vowed to clear the rural camp, which activists bill as a utopian leftist farming community, after scrapping plans for the airport in January.

AFP journalists on the scene said they could hear tear gas canisters being thrown and a helicopter whirring overhead after the operation began at 6.00 am (0400 GMT). From the police perimeter, several of the protesters' barricades could be seen to be on fire as activists lobbed molotov cocktails from a field in the direction of the police.Interior Minister Gerard Collomb said none of the shelters being destroyed was part of a bid by protesters to register their
agricultural projects with the authorities.

“Their occupants refuse all discussion and reject the idea of occupying the land in a legal fashion,” he said in a statement.

“This situation is not acceptable under the rule of law, no more than the climate of insecurity, acts of vandalism and obstruction still seen on the site over recent weeks.” Richard Lizurey, head of the French gendarmerie, said 19 units of the military police force had been mobilised, involving 1,500 to 1,700 officers.

Camp residents have filed around 15 applications to authorise farming projects they have been running on the massive squat, including livestock and
beekeeping.

Activists first began occupying the farmland near the city of Nantes in 2008 in protest at the airport plan, and it had since grown into a sprawling
1,600-hectare (4,000-acre) settlement.