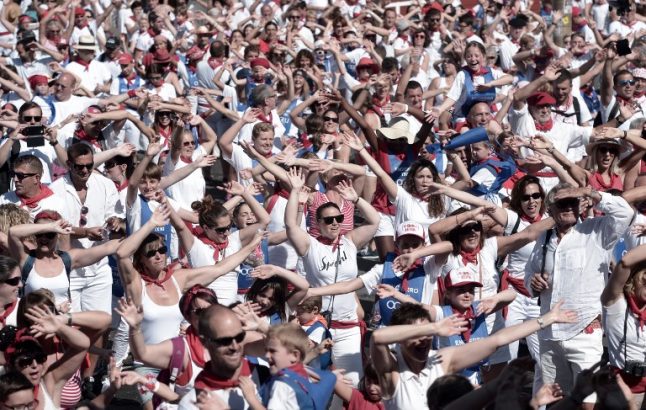 Revellers at the Fete de Bayonne 2017. Photo: AFP
The Bayonne Festival of course – better known in French as the Fêtes de Bayonne takes place at the end of every July and is known as France's wildest festival.
While the festival is not liked by all due to the bullfighting that takes place the five-day festival in south western France that is known for being a blur of parades, dancing, and good food.
But this year there will be a slight difference.
Revellers at this year's festival, which usually number up to a million people, will have to pay between €7 and €8 to attend.
Although the small fee will cover the entry for whole three days.
But you'll only have to pay it if you're from out of town, with residents of Bayonne exempt from the charge if they can provide proof that they live there.
“Our festival costs close to €1.5 million, of which about €450,000 goes to security,” said Jean-René Etchegaray, Mayor of Bayonne.
This year's festival is due to take place between the 25th and 29th of July.
Andy Fisher, a New Zealander guide from the local tourist office, told The Local before last year's festival that the event is quickly becoming “one of the biggest festivals on the planet”.
“There's everything you could want in a festival and a huge variety of activities. It's a real excuse for a good knees-up for all generations,” he said.

READ ALSO: Should you really go to the Bayonne festival?