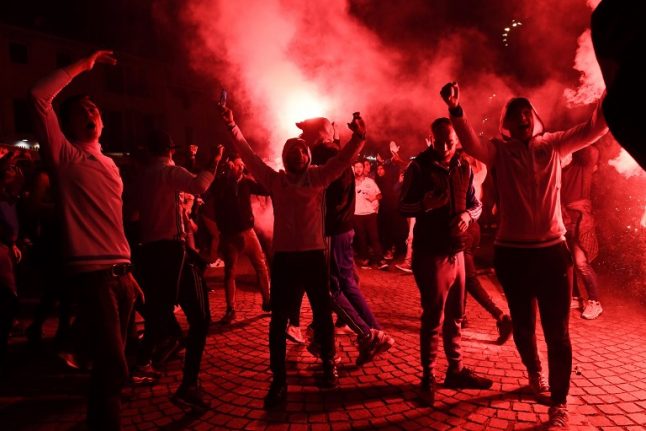 Olympique de Marseille (OM) fans react after victory of their team in the Europa League semi-final football match Salzburg against Marseille in Marseille on May 3, 2018. Photo: AFP
French giants Marseille will take on Athletico Madrid on the home turf of their big rivals Lyon.
As a result French authorities fear that the extreme rivalry between the fans of the two finalists, as well as the longstanding rivalry between Marseille and Lyon supporters could lead to violent clashes.
And they aren't taking any chances, with plans to deploy 1,250 police officers across the city and around the stadium.
On top of the extra police, there will be gendarmes and CRS riot police officers on duty across the city and at the stadium, in addition to 1,100 stewards.
The police will also have a helicopter to monitor crowd movements, 400 stadium cameras and two water lances at their disposal.
As a further precaution, there will be no meeting point for fans outside the stadium and the two teams will be allocated separate car parks.
The only possible meeting point between the fans of the two finalist teams — the A7 between Orange and Lyon — will also be monitored and the sale of alcohol, firecrackers and fireworks has been banned in the area.
France's Interior Minister Gerard Collomb is set to review all the security before the kickoff at 8.45 pm.
“We are putting in place exceptional numbers, twice as big as for a Euro 2016 match,” the prefect of Lyon, Stéphane Bouillon, told the French press, adding that the first task is to prevent Marseille supporters from crossing paths with the Madrid fans.
Only around 11,500 Marseille fans will officially be in attendance and those without tickets have been urged not to travel and so far around 9,000 tickets have been sold to Athletico Madrid fans.
The fact Marseille fans have been chanting about threatening to “break” everything in the stadium in Lyon (see video below) has only heightened fears of trouble.
The chant is directed at Lyon chairman Jean-Michel Aulas, a hated figure among the Marseille support and perhaps sung more to rile their rival club rather than as a real threat.
When PSG played in the final of the French league cup in Lyon last year, their fans were accused of breaking toilets and seats and the club was subsequently fined.

Having dropped into this competition following a surprise group-stage exit from the Champions League, Atletico are favourites, but Marseille are
motivated by the prospect of playing on home soil.

They are also driven by the desire to win a second European trophy, just as the club marks 25 years since beating AC Milan in the 1993 Champions League final.