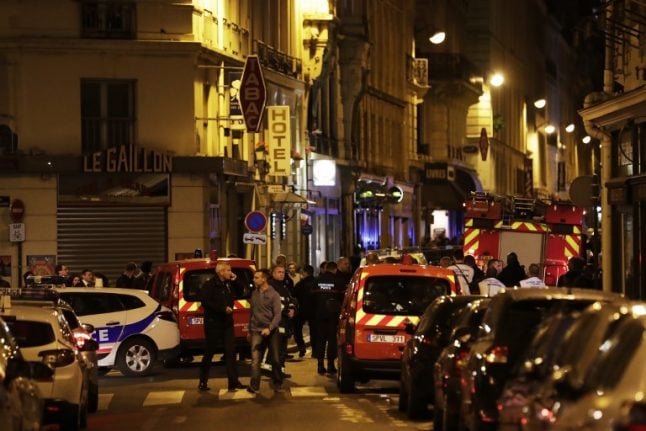 The man, identified as naturalised Frenchman Khamzat Azimov, carried out the attack Saturday night in a lively area of theatres and restaurants near the city's historic opera house.

The knifeman, whose rampage followed a series of jihadist assaults in France that have killed 246 people since 2015, was shot dead by police after an officer failed to subdue him with a Taser.

A source close to the inquiry said Azimov grew up with his family in Strasbourg, eastern France, which has a large community of Chechen refugees.

His parents, now living in Paris, have been taken into custody as well as a friend in Strasbourg described as the “individual closest” to Azimov, according to a source close to the investigation.

Amaq, the IS propaganda agency, released a video on Sunday in which it claimed responsibility for the attack, with footage which it claims shows Azimov pledging allegiance to the jihadist group.

IS has long urged followers to seek “martyrdom” by targeting American or European “infidels” by any available means, and allegiance videos help the group bolster its claims of responsibility.

Although Azimov had no criminal record, he had been on both of France's main watchlists for suspected radicals — the so-called “S file” and a more targeted File for the Prevention of Terrorist Radicalisation (FSPRT), which focuses on people judged to be terror threats — since 2016.

One source said he had been questioned last year “because he knew a man who was in contact with a person who had gone to Syria”.

Hundreds of fighters from Chechnya have joined Islamic militant groups in recent years, following two bloody separatist wars against Russian-backed authorities in the 1990s and 2000s.

Chechen leader Ramzan Kadyrov said on the Telegram messenging app that Azimov had obtained a Russian passport when he was 14, before obtaining French nationality.

Kadyrov said France bears “full responsibility” for the attack, because although Azimov was born in Chechnya “he grew up and formed his personality, his opinions and convictions within French society”. A 29-year-old man was killed in the attack, while a Chinese man aged 34 who lives in Luxembourg and a woman of 54 were seriously wounded and rushed to hospital.

A 26-year-old woman and a man of 31 were slightly wounded. Officials said all the wounded were out of danger.

“I was taking orders and I saw a young woman panicking and trying to get into the restaurant,” Jonathan, a waiter at a Korean restaurant, told AFP.

“The attacker entered a shopping street, I saw him with a knife in his hand,” he said. “He looked crazy.”

French President Emmanuel Macron tweeted: “France has once again paid the price in blood but will not give an inch to the enemies of freedom.”

“So sad to see the Terror Attack in Paris,” US President Donald Trump added in a tweet late Sunday, adding: “This kind of sickness and hatred is not compatible with a loving, peaceful, and successful country.” The attack again underscored the difficulty in tracking suspected extremists by police facing thousands of potential risks, either from home-grown radicals or recent arrivals.

About half of the nearly 20,000 people on the FSPRT watchlist are under active surveillance.

“What good does this S file do if we don't use it to get these ticking time bombs off French soil,” far-right leader Marine Le Pen posted on Twitter.

But spokesman Griveaux defended the government, saying it had foiled 22 terror attacks over the past 15 months.

“Unfortunately, there's no such thing as zero risk,” he said.

France has suffered a series of major Islamist attacks including the massacre at the satirical newspaper Charlie Hebdo in January 2015, followed 10 months later by the killing spree in Paris that claimed 130 lives. The next summer the Bastille Day truck attack in Nice killed 86.

Most of the attacks have either been claimed by the Islamic State or were carried out in its name.

Thousands of French troops remain on the streets under an anti-terror operation known as Sentinelle, patrolling transport hubs, tourist hotspots and other sensitive sites.