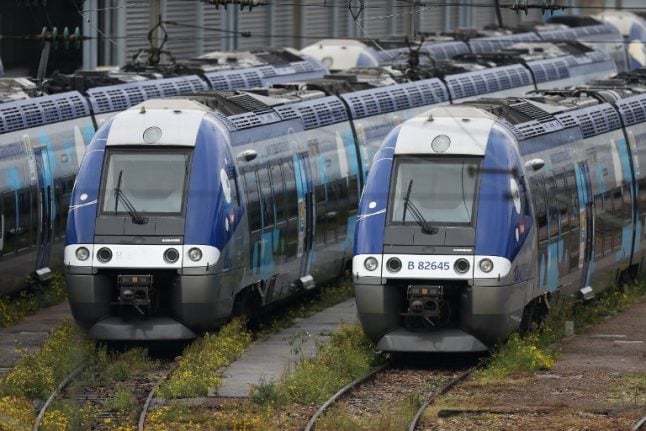 A protester holds a sign reading "No to the killing of SNCF" as striking railway workers demonstrate in front of Gare de l'Est station in Paris on May 14, 2018. Photo: AFP
The French rail strikes kicked off at the beginning of April and have caused disruption to the country's 4.5 million train users on a rolling basis since then.
This intense industrial action has been an attempt to prevent the government's reform of the debt-laden and loss-making SNCF rail operator which includes putting an end to the special rail worker's status for new recruits that includes a job for life, seven-hour days and generous pensions.
The government also wants to turn the sacred SNCF into a joint-stock company whose shares would be held by the state — a move unions see as a first step towards privatisation ahead of the opening up of France's rail passenger market to competition starting in 2020.
The hardline CGT has repeatedly accused the government of hiding its true intentions.
Their claims however have been denied by the government as well as SNCF chiefs, on Sunday — the 17th day of the ongoing strike action — a document was published by Le Parisien which rail unions say is evidence of the government's plans for privatisation.
So, what did it say?
According to this document, the railway company has asked the government to “limit the non-transferability of shares to the SNCF holding company”.
READ ALSO: Photo: AFP
In other words, only SNCF would officially be protected from privatisation while its subsidiaries, which includes SNCF Mobilités (responsible for managing the trains) and SNCF Réseau (which manages the infrastructure) would not be.
Unions have jumped on it as proof that they were right all along.
“This request paves the way for a privatisation of the public company while for weeks the government and management repeated to us in chorus that this railway reform is not a privatization of the SNCF,” Fabien Villedieu, spokesperson for the Sud-Est rail union told Le Parisien.
Fanny Arav from the Unsa rail union suggested that the move could be a way of opening up capital at the company “little by little”.
But is it really true that the government is seeking to privatise the railways?
According to one ex-deputy CEO of SNCF who spoke to The Local anonymously these claims are a “complete fantasy” and are more about union attempts to garnering support from the French public who, as the strikes go on, are increasingly in favour of the government's reforms.
“This is about the unions using something insignificant to gain support,” he said. “Privatisation has always been a sensitive issue in France and they know this. “But there is no way the government would privatise the SNCF  — it would cost them more to sort out and make attractive for another buyer than to do it on their own,” he added.
Since the media furore over the leaked document, the government has been at pains to make its position clear and dispel the rumours it intends to sell off the railways.
One of the MPs reponsible for the rail reform bill, Jean-Baptiste Djeberri has come out and said that the government will add a clarification in order to dispel the “fantasy of privatisation”.
And France's Transport Minister Elisabeth Borne also weighed in, tweeting on Sunday: “The three businesses, the SNCF, SNCF Mobilites and SNCF Reseau are and will remain 100 percent public and non-transferable: this is not only a promise, this is what have written in the law voted on in the National Assembly! We will confirm it during the debate in the Senate.”

And there's no doubt the government will be hoping their words will be enough to calm fears as unions launched a consultation of the SNCF's 147,000 staff on whether or not they back the reform.
SNCF chief Guillaume Pepy has dismissed the consultation, which will run until May 21, as having “no legitimacy”, but unions say it will help them decide how to move forward.
French rail unions stepped up their strike action on Monday – the 18th day of the ongoing industrial action – which left rail services severely disrupted around the country. Strikers blocked train depots and access to offices for non-striking workers.
Fewer and fewer rail staff have been taking part in the strikes as the weeks have gone on, and the Unsa union had said it was “vital to deal a heavy blow” to pressure the government into making concessions.
But despite Monday being billed by unions as a “day without rail workers”, just a little under 28 percent of SNCF staff actually walked off the job, according to company management.