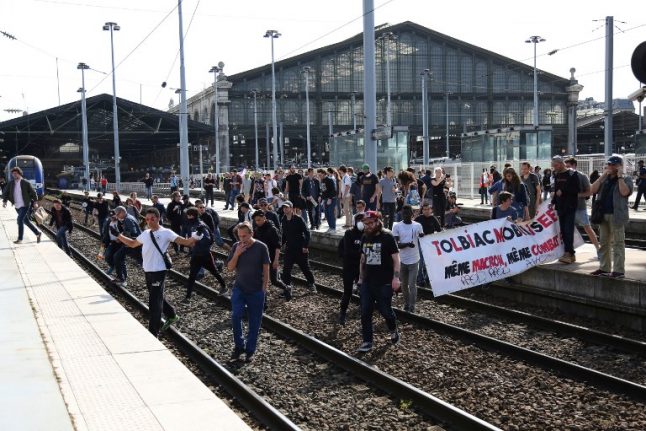 Unions had called on workers to show that their rolling strike was not losing strength and it appears their call was heard.

French rail chiefs noted a huge jump in the number of striking workers on Monday which left services across the country severely disrupted.

In the Paris region only a third of Transilien trains were operating and the RER train lines were also reduced to a similar level of service.

What that meant for passengers varied depending on the region. Many passengers took to Twitter to complain about the travel chaos with one person noting that while SNCF said a third of trains are running, there were none at all between Dieppe, Normandy and Paris.

Passengers were advised to visit the SNCF website for further information but also told travellers to delay their journeys if possible or find alternative routes.

Unions have dubbed Monday “the day without rail workers” in an attempt to boost participation in the strike that began on April 3rd and in order show the French government they still had support.

“We are going to go into the offices to convince workers to down tools,” a union activist told Le Parisien. “We need to show the government that the movement is not running out of steam.”

The percentage of rail workers taking part in the strike had fallen from 33.9 percent in early April to just 14.5 percent in May. SNCF fear that more militant union members might take matters into their own hands to create even further disruption on the rails like blocking the points on tracks.

On Monday there were reports of rail workers blocking train depots in Calais and Lille.

In Marseille, students joined forces with rail workers to block the arrival and departure of trains on the platforms at Saint-Charles station, a major hub.

“They've blocked everything. We understand why,” passenger Romeo Andre told AFP. “But at some point you have to stop penalising others.”

Rail workers are protesting against the government's plan to reform the heavily indebted rail sector which includes bringing an end to the special employment status for newly hired rail workers. Unions have vowed to make the government back down on plans to deny job-for-life and early retirement privileges for new recruits on the railways.

They also reject turning the SNCF into a joint-stock company whose shares would be held by the state — a move they see as a first step towards privatisation ahead of the opening up of France's rail passenger market to competition starting in 2020.

On Monday rail workers will also be asked to vote on whether they the support the government's reforms.

SNCF chief Guillaume Pepy has dismissed the consultation, which will run  until May 21, as having “no legitimacy”, but unions say it will help them
decide how to move forward.

Unions want to prove that support for a long-running strike remains strong despite signs it is tapering off.

Laurent Brun, head of the rail branch at the hard-line CGT union, said: “It's important to stamp out this idea that 80 percent of rail workers support this reform.”

Brun said that many workers cannot strike for “financial reasons”.