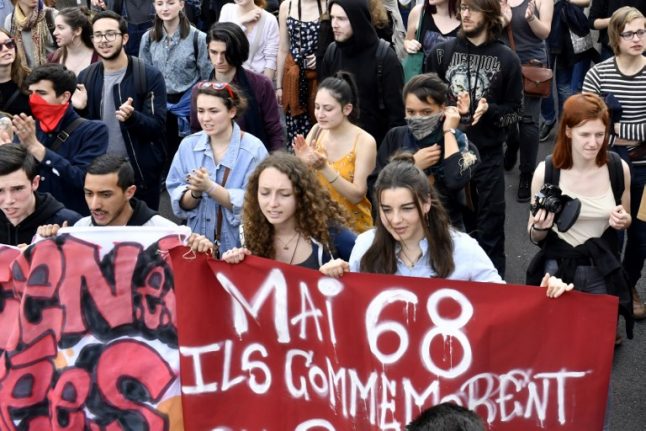 Instead of celebrating the anniversary, the French president appears to be inadvertently recreating it. He has proposed a controversial higher education reform at a particularly inopportune moment, sparking major protests.

May ’68 had a significant impact on French society, politics and culture. Beginning with student protests, civil unrest soon spread and took on a philosophical dimension, touching every social milieu. Today these events have become a globally recognised myth of French culture and social change.

Macron, who has barely completed his first year in power, designated the anniversary an opportunity for France to “come out of the ‘morose’ ways in which the events that contributed to the modernisation of French society are discussed”. For years, this period in French history was talked about in a negative way, and blamed for France’s ongoing social ills, including by former presidents. Contradictions of aims and demands at the time (clear on the part of the workers, vague and mixed on the part of the students) made May ‘68 a messy affair. Opinions in its wake have been so divided that memory of it is often distorted.

Macron, as the first French president born after May '68, seemed to want to instill a more positive attitude. Nevertheless, he soon changed his mind, deciding not to commemorate it at all, but without giving a real reason. It’s against this backdrop that he brought in his reforms, perhaps explaining why he finds himself facing a rerun.

Macron’s proposed reforms include competitive selection and specialisation processes for universities in a bid to tackle oversubscription and high failure rates. The plans have been greeted with outrage among the general population and targeted action on campuses. Universities across France have suffered closures over the last month as students resist these changes, decrying elitism and social injustice.

Students have occupied campuses, set up blockades, and taken to the streets to protest. Banners and placards have taken inspiration from '68 to give a visual voice to the crowds. This is all as exam season enters into full swing, preventing many from sitting assessments.

France’s education system has its egalitarian roots in the 19th century. A series of laws progressively made school education mandatory, secular and free. Central to the higher education system is the rule that anyone holding the baccalaureate qualification (roughly equivalent to A-Level) is free to attend university. The reform of this qualification is one of the central points of contention in the student protests.

This history adds up to a fierce sense of pedagogical morals, and woe betide anyone who threatens them. If the laws and entry requirements add up to equality and liberty of access, the only remaining strand of the French national motto is the fraternity required to stand up and defend the right to education.

Unfortunately, these shining ideals bring with them a different cost: success. While around 90% of pupils pass the baccalaureate, less than 40% of university students complete the degree which they initially began. This discrepancy was what caused Macron’s government to launch a wide reaching reform of the baccalaureate. The new law, introduced in March 2018, will give universities the power to introduce selection criteria and candidate ranking, in the hope of only taking on students equipped to stay the course.

Centre-left French newspaper Libération began the year asking “Will 2018 be the anti-May '68?” Singing the praises of May '68’s revolt and revolutionary spirit, the paper presented a counter-revolutionary 2018, in which the freedom, equality and fraternity sought back then are stifled under harassment, threats to security , and social malaise. Little did the newspaper realise that May 2018 would actually bear a striking resemblance to its predecessor.

Social unrest sprang up in similar ways in both cases. Today’s students have been occupying campuses across the country, against a background of transport strikes, railway workers protesting in the streets, and Air France being grounded as staff strike over pay. The events of May '68, like those of May '18, stem from student resistance to measures to counter chronic oversubscription. Both have been mirrored by protest in other key groups. And both instances have exploded into a fierce defence of French principles.

The current student protests may sit in a radically different context to those of '68 (with a shift from the socio-cultural to the socio-economic), but there is no denying the continuity of spirit. In both cases, we have a “convergence des luttes” (convergence of struggles) that shows that the threat to the French social model is at stake.

The numbers aren’t looking good for Macron if he wants to avoid a scene. Recent YouGov polls indicate that in the context of the current protests, 52% of French people support a return to the events of May '68. With only 28% satisfied with Macron’s first year, the French president could find himself reliving rather than commemorating May '68.

Despite the poor timing of Macron’s reform proposals, the May '68 / May '18 convergence highlights an engagement with socio-political issues that could be used to his advantage. In the same poll that indicated dissatisfaction with the president’s first year, over half of French people estimated that Macron carries out his promises. The French collective voice will clearly not be silenced, and Macron would do well to provide an ear to its message. Revolutionary ideals die hard, especially in France.

Elizabeth Benjamin is a lecturer at Coventry University inn the UK. This article was published on The Conversation. CLICK HERE to read the original as well as other articles.