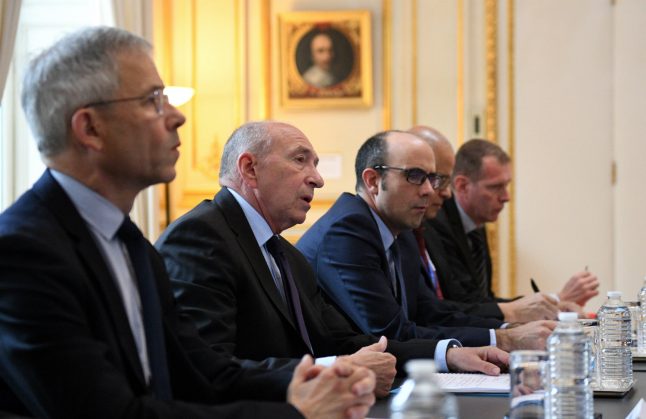 French Interior Minister Gerard Collomb (2L) in a meeting with Chiefs of Staff at The Ministry of Interior in Paris on May 13th. Photo: AFP

The young Frenchman, born in 1997 in the southern Russian republic according to the source, was shot dead by police after carrying out the assault on Saturday evening near the city's main opera house.

“He had no judicial record,” the judicial source told AFP.

“(The attacker) is French, born in Chechnya in 1997. His father and mother were placed in custody Sunday morning.”

But the man was on the so-called “S file” of people suspected of radicalised views who could pose security risks, even though he did not have a criminal record, sources close to the inquiry told AFP on Sunday.

Witnesses said they heard the attacker shout “Allahu akbar” (God is great) as Parisians fled into restaurants and bars after realising another possible terror attack was underway in a country already reeling from a string of jihadist assaults that have killed more than 245 people in the last three years.

“I was taking orders and I saw a young woman trying to get into the restaurant in panic,” Jonathan, a waiter at a Korean restaurant, told AFP.

The woman was bleeding and a young man fended off the attacker who then ran away, he said.

“The attacker entered a shopping street, I saw him with a knife in his hand,” he said. “He looked crazy.”

Milan, 19, said he saw “several people in distress” including a woman with wounds to her neck and leg.

“Firemen were giving her first aid. I heard two, three shots and a policeman told me that the man had been overpowered.”

French President Emmanuel Macron tweeted: “France has once again paid the price in blood but will not give an inch to the enemies of freedom.”

Authorities said a 29-year-old man was killed in the attack and that a terror investigation had been launched. The assailant had no identifying documents on him.

The Islamic State group claimed responsibility, saying one of its “soldiers” had carried out the attack, according to the SITE monitoring group, but provided no corroborating proof to back their assertion.

Two of those wounded, a 34-year-old man and a 54-year-old woman, were rushed to hospital in a serious condition but Interior Minister Gerard Collomb later told reporters all the injured would survive.

“I have just seen the person who was most seriously injured, she is better, she is saved,” he said.

French Prime Minister Edouard Philippe said police were on the scene “within five minutes” of the attack and that some nine minutes later the assailant was dead, he added.

“The speed of the response obviously avoided a heavier toll,” he said.

A police source told AFP one officer tried to restrain the attacker with a taser but when that failed a colleague shot the man dead.