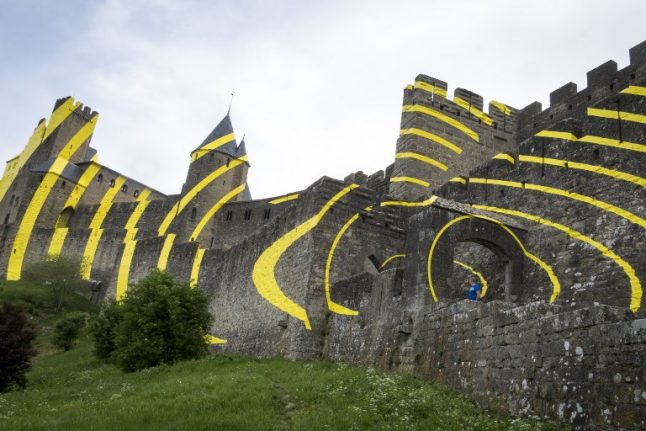 The circles were added to the fortress known as the Cité de Carcassonne by contemporary Swiss artist Felice Varini.

He was asked to come up with one of his famous eye-deceiving illusions using the technique known as anamorphosis to celebrate 20 years since the famous medieval walled city in south east France was granted Unesco World Heritage status.

And this is what he came up with. The giant yellow circles spread out around the ramparts like ripples in water. The thin aluminium strips were glued on to the historic stones of the fortress that was restored in the 19th century.

While the artist is proud of his work, that was officially inaugurated on May 4th, it is not to the liking of many locals.

“The people of Carcassonne were not consulted. This is ruining our lives, because we have to look at it all day,” one inhabitant told France Info radio.

A petition has been launched to campaign for the removal of the artwork, which it describes as filth. It has quickly garnered 1,400 signatures.

According to reports some critics appear to have taken matters into their own hands and tried to clean off the artwork themselves.

Signs have been put up in several languages warning people not to touch the artwork or “tear” it. Visitors are also warned that video surveillance is in place.

As for the artist he believes the locals will come to like his installation.

“I have often met this type of reaction. At first there is incomprehension and then opinions change little by little,” Varini said.

He also said that the opposition proves that the locals “are deeply attached to their heritage”.

France's Centre of national Monuments (CMN), which commissioned the work, has refused to reveal the cost of the project.

The artwork will, in theory, remain in place until September.

The Cité de Carcassonne features a double row of fortified walls that run almost two miles long and are accompanied by 56 imposing watchtowers.

Carcassonne is visited by some three million tourists each year.