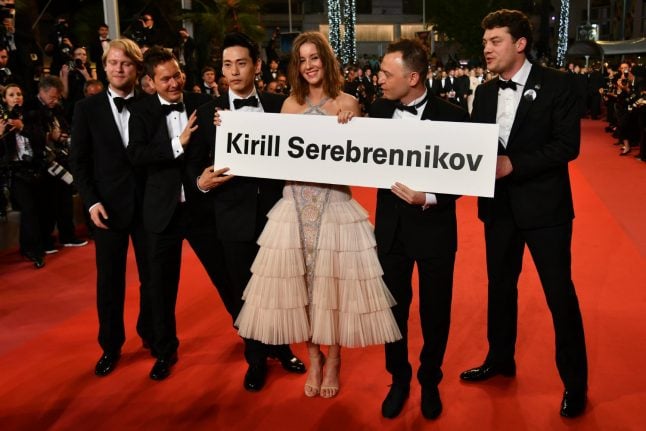 The cast of Kirill Serebrennikov's “Leto”, a biopic of the Soviet-Korean rock legend Viktor Tsoi, were cheered as the movie premiered at the world's top film festival.

They had earlier held up a white placard with the director's name on it after climbing the steps of the red carpet to the cinema.

A seat was left symbolically empty inside for Serebrennikov, who has been under house arrest on embezzlement charges since last August.

He has dismissed the charges as “absurd” and his supporters see them as political.

Serebrennikov's detention has sent shockwaves through the Russian arts world.

The 48-year-old has revolutionised Moscow's theatre scene with radical stagings of new plays and by reinventing classics.

He has also won prizes at the Cannes and Rome film festivals, while his 2012 film “Betrayal” was nominated for the prestigious Golden Lion at Venice.

“Leto”, which means summer, is in the running for Cannes' top prize, the Palme d'Or.

It tells the story of Tsoi, whose songs are seen in Russia as anthems of the late 1980s Perestroika era.

Both the festival and the French government pleaded with Moscow to allow Serebrennikov to travel to Cannes for the screening.

Cannes director Thierry Fremaux told reporters before the premiere that Russian President Vladimir Putin had told them that “Serebrennikov has problems with the judicial system of our country. I would have loved to help but the courts are independent.”

Russian conservatives were outraged when Serebrennikov was allowed to direct a ballet about legendary gay ballet dancer Rudolph Nureyev at the Bolshoi.

Nikita Mikhalkov, a powerful Oscar-winning film director with close Kremlin links, said Serebrennikov should not have been allowed “to hang Nureyev's cock” in the country's most important theatre.

This was a reference to the production's use of a famous full-frontal nude photograph of the dancer by Richard Avedon.

Serebrennikov is one of two directors competing for the Palme d'Or who has been banned from travelling to the festival.

Dissident Iranian director Jafar Panahi is also barred from leaving his homeland for supporting pro-democracy activists after the “stolen election” of 2009.