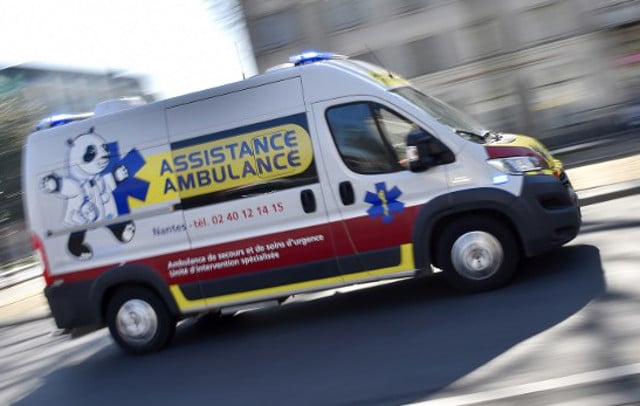 Ambulance in Nantes. Photo: AFP
The last thing you want to be doing in a health emergency is frantically googling which numbers you need to call.
And unlike the UK and US, France doesn't have a one-size fits all emergency number, which can make it more difficult for foreigners to know what to do.
If you end up in a health emergency in France or have health problem in the middle of the night that cannot wait until you get a doctor's appointment the next day there are various options.
Here's how they work.
SAMU (Emergency services) – Phone number: 15
Urgent emergency care is run centrally by a public health body known SAMU or “Service d'aide médicale urgente”, a coordinated service to call in case of any serious medical emergency.
Each département runs its own emergency care services, which range from private medical transport services to full-blown mobile intensive care units (Service Mobile d'Urgence et de Réanimation – SMUR).
Operators may speak English, but there is no guarantee. SAMU is staffed with qualified doctors who are trained to determine the best response, including whether it's serious enough to send a SMUR unit.
You can call SAMU by dialing 15 and should only do so for serious medical emergencies, such as loss of consciousness, neurological disorders or chest pains. A SMUR (Mobile Emergency and Resuscitation Service) vehicle leaving a hospital in northern France. Photo: AFP
How much does it cost?
Calls to SAMU are free but you will be billed for their services, with prices for consultations and call outs varying greatly according to department.
In some areas, the price can be as high as €2,400 however don't let that worry you — costs will be reimbursed by the government's social security scheme and your complementary insurance policy, if you have one, in the same way as other medical costs.
For a typical patient this means that around 70 percent of this cost will be covered by the government health insurance scheme and the balance covered by additional private insurance known as mutuelles. If you do not have private insurance, in some cases you will have to cover the extra cost yourself.
In France, a doctor has to confirm that you are really in need of an ambulance service, otherwise you’ll have to pay for ambulance transport.
By French law, in an emergency any French hospital or SAMU must treat any patient, regardless of their ability to pay.
Sapeurs Pompiers (fire brigade) – Phone number 18
It might sound odd to a foreigner but in addition to responding to fires, the sapeurs pompiers (fire brigade) can also be called out to deal with medical emergencies, including traffic accidents and accidents in the home.
The firefighters are trained and fully equipped (all of their ambulances carry defibrillators) to deal with emergency health situations. Their job will be to get you to a hospital as soon as possible.
They have more ambulances than the SAMU service and in many areas, especially rural regions, they will be fastest to the scene.
They coordinate with all other emergency services and may hand the incident over to the specialised SAMU emergency medical service.
They can be contacted by dialling 18 or the international 112 number.
The pompiers also have specialist units for accidents on construction sites or in water, when their divers may be called out.
Note that if you are heavily pregnant and feel you are about to give birth the pompiers will normally take you to the nearest hospital rather than the one you are booked to give birth in.
How much does it cost?
As with the SAMU service, it is free to call the French fire brigade from any number. But unlike SAMU, it is free for them to come to the scene — unless, that is, you abuse the system.
Since 2016, France's firefighters have charged €463 for any false alarms. Photo: AFP
SOS Médecins – 3624
For less urgent medical problems, you can call SOS Médecins — a private doctor call out and ambulance company which runs a 24-hour service. This is the service people tend to call at weekends and during nights when normal doctors are not available.
They can offer medical advice over the phone and will send someone out if the situation requires it.
To get in touch with SOS Médecins, dial 3624.
How much does it cost?
A call to SOS Médecins will cost you €0,15 per minute. If a doctor makes a visit in an emergency situation, it will cost €45.60 and at night it can cost as much as €82.50 — although it's worth noting that prices depend according to where you are based.
Fees can also vary according to the time of day and the day of the week.
However these visits will be reimbursed by the social security system by up to 70 percent and for people with additional health insurance, fees may be completely covered.
Pan-European emergency number
If you need to call for an ambulance or on-site help, you can always use 112, which is the pan-European emergency number.
As it's a Europe-wide number, you can also ask to be connected to an English-speaking operator. Those who are deaf or hard of hearing are also able to send text messages to 114. Operators will direct you to the service you need.
It is free to call. Photo: AFP
Hospitals
If you are able to, you can also head straight to the nearest hospital in an emergency (look for “les urgences”). Most towns have a Hôpital or Centre hospitalier where emergency care is available.
In larger cities, you may find a regional hospitals (centre hospitalier regional – CHR) or university hospitals (centre hospitalier universitaire – CHU).
Health cards
Your European Health Insurance Card (EHIC) enables you to access state provided healthcare in France at a reduced cost or sometimes free.
If you are admitted to hospital in an emergency you should present your card to the hospital admissions department. You may also be asked to show your passport or other valid identity document.
The EHIC does not cover private treatment, so make sure you are treated by a state healthcare provider in France (conventionné). Conventionné practitioners can fall into two categories: Secteur 1 are practitioners who charge the official social security rate.
Meanwhile Secteur 2 are doctors who charge an extra fee on top of the official rate.
Things to think about
On top of the information you normally give to the emergency services, such as your name and where you are, there are some additional bits of information you'll need that are more relevant to life in France.
For example, depending on where the emergency is taking place, you may well need to know the code to the car park in your apartment/office block, as well as the building code.
Also, if you have a known medical problem or regularly take prescription drugs, make sure you know how to say their names in French.
Here's a link to a list of French vocabulary that might come in handy in case of an emergency.