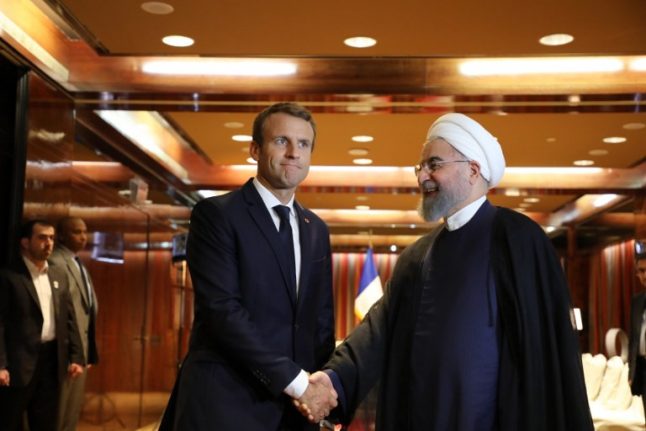 “The French and Iranian presidents agreed to pursue their joint efforts with all nations involved, with the aim of continued implementation of the nuclear deal and maintaining regional stability,” Macron's office said in a statement.

Earlier on Wednesday French government ministers reacted with anger and defiance to US president's Donald Trump's decision to pull his country out of the nuclear deal with Iran.

The foreign ministers of France, Britain and  Germany will meet Iranian representatives next week, Paris said Wednesday  after President Donald Trump pulled the United States out of a landmark nuclear deal with Tehran.

“We will meet with my British and German colleagues on Monday, and also  with representatives of Iran, to consider the entire situation,” French
Foreign Minister Jean-Yves Le Drian told RTL radio.

Le Drian insisted the Iran nuclear deal was “not dead”.

French Economy Minister Bruno Le Maire said separately on France Culture  radio that the decision was “an error” not just for international security but from an economic point of view.

It was “not acceptable” for the US to be the “economic policeman of the planet”, he said.

Trump defied European pleas to stay in the pact, which curbs Iran's nuclear  program, and reimposed crippling sanctions which will come into effect within six months.

The decision marked a stark diplomatic defeat for Europe, whose leaders, repeatedly and in person, had begged Trump to think again.

Le Maire pointed out that the withdrawal gives European firms doing business in Iran the “very short time of six months” to wind up investments — or risk US sanctions.

“In two years, France has tripled its trade surplus with Iran,” he said.

Le Maire said this would lead to “consequences” for major French companies,  such as Total, Sanofi, Renault and Peugeot.