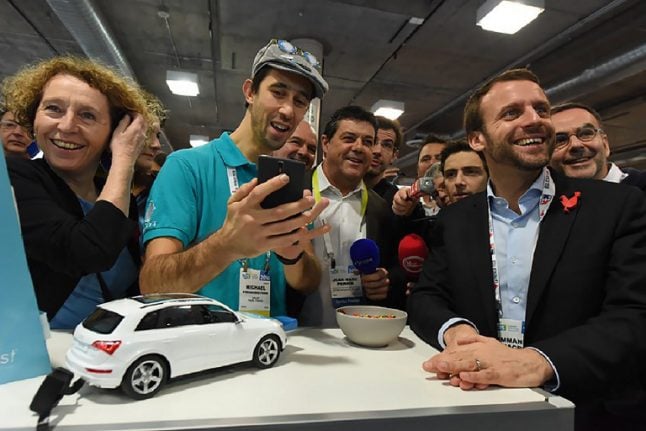 Muriel Penicaud (L) and Emmanuel Macron (R) in Las Vegas, 2016. Photo: AFP
Before joining Macron's cabinet Penicaud headed Business France, the agency spearheading the government's efforts to attract foreign investors and promote homegrown companies abroad.
She hired French advertising and public-relations firm Havas to organise a promotional evening at the Consumer Electronics Show, a top industry gathering in Las Vegas where Macron was the star speaker.
An inquiry was opened by investigating magistrates last July after reports that the contract for the event, which cost nearly 400,000 euros ($475,000), was awarded without putting out a public tender as required by French law.
Penicaud has been summoned for questioning by a judge on May 22 as an “assisted witness”, meaning she can be accompanied by a lawyer, her office told AFP, confirming a report in the Canard Enchaine investigative weekly.
The left-leaning Liberation newspaper had reported last year that an audit of the event had found “no purchase order, no signed contract, no bill” connected with the Vegas event with Macron, whose presidential ambitions were already becoming evident to many.
The bill was later negotiated down to about 290,000 euros, but other reports claimed Penicaud waited six months before revealing the audit to Business France's board of directors.
Anti-corruption investigators searched the offices of Havas and Business France last June, discovering an email suggesting that Penicaud had been “briefed” ahead of the event that it could raise red flags.
Havas, for its part, has said it assumed that the event fell under a “framework contract” it signed with Business France in June 2015 — after winning a public tender — and did not require a separate bidding process.
Penicaud is currently orchestrating an overhaul of France's unemployment benefits system, part of Macron's wide-ranging economic reforms that have prompted a stream of protests in recent weeks.