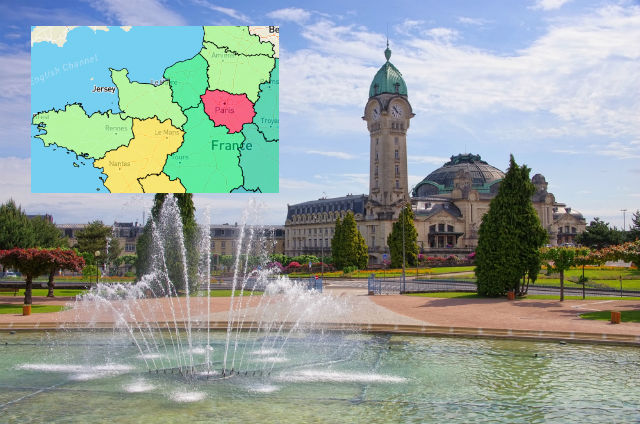 Photo: Kassandra2/Depositphotos
Many dream of buying a house and moving to France but it's important to pay close attention when choosing which region if, like most, you don't have a big pot of gold to dip into.
But what does the cheapest place to live really mean? Of course, property prices are usually the biggest factor, as well as living costs, and both of these can be affected by whether you are planning to move to a major city or to deepest darkest “France Profonde”.
Naturally, living in a city in France is likely to be a bit (or a lot, when it comes to Paris) more costly than in rural locations with living costs generally higher in more urbanized areas.
To illustrate this, an extensive study carried out in 2016, revealed that daily life in the French capital is on average almost nine percent more expensive than anywhere else in France.
And in November, Paris property prices hit a record high, with house hunters having to fork out a record €9,000 per square meter on average if they want to own a piece of the French capital.
But it's not just in Paris where property prices are through the roof — housing costs can also be eye-watering in areas close to the sea.
So, it's important to pay close attention when choosing which region and there is still the possibility to buy a relatively good house for under €50,000 if only you dare move to France’s most rural regions.
The map below shows France divided up into the country's historical regions and coloured according to how expensive it is to buy property there based on a study carried out by French property website seloger.com in December 2017.
The cheapest areas are blue with red representing the most expensive region and the greens and turquoises in between showing the sliding scale of prices.
The cheapest area — shown in blue — is the Limousin in southwest-central France, with the average price per square metre at €1,242.50, well below the national average of €2,894. Map: seloger.com
Sparsely populated, mainly agricultural and covering part of the rugged Massif Central mountains, the area offers stunning scenery, and its capital, Limoges, is famous the world over for its porcelain.
If you're keen on this area, you are bound to find a great deal in the La Creuse department which has beautiful houses averaging around €30,000 — a mere £26,000.
Following the Limousin in terms of cheap property prices is the neighbouring rural Auvergne region in central France where the average price per square metre is €1,425. Just don’t be surprised if your closest neighbour is a field of cows.
Hot on their heels are swathes of north-eastern France, with properties in Lorraine, Champagne-Ardenne, Bourgogne and Franche-Comté priced at between €1,510.50 and €1,601.50 per square metre.
Renting
But of course, not everyone moving to France is looking to own their own property straight away, if ever — so where can you find the cheapest rents?
In terms of big cities in France, living costs can be high but there are some where prices are still manageable.
Saint-Étienne in east-central France, Mulhouse in the east and the port city of Brest in the northwestern Brittany region took the top three spots in a Seloger list of the cheapest French cities for renting.
Rents in these cities ranged from €7.8 to €8.5 per m² — which is enough to make anybody living in Paris, where the average price for an apartment has shot up to €1,014 each month, up sticks and move sharpish. Also making the list were Limoges, Le Mans in northwestern France, Besancon in eastern France, near the border with Switzerland, and Perpignan in the south near the Mediterranean coast (see above) where renting ranges from €8.9 to €9.7 per square metre.
These prices are a massive drop on Paris costs, where you can find yourself forking out a pretty penny for a pokey studio flat, probably a chambre de bonne on the top floor of an old building, with a shared toilet and a kitchen sink hidden in a cupboard.
Seloger give a special mention to Angers in western France which comes tenth on the list.
“With affordable rents, Angers offers an unequaled quality of life. If we were to advise a rental destination today, it is indisputably to Angers that our eyes would turn,” said the property site.
“Its average rent of € 0.4/m², down -1.2 percent over one year, does not reflect the quality of life offered by this beautiful city of the Loire region.”
The site goes on to praise the city's dynamic economy, high quality heritage, green spaces both in the city and surrounding landscapes which allow Angers to offer an exceptional quality of life.
And if you were in need of any more convincing, in January 2017, Express magazine in France elected Angers the best city in France in terms of “quality of life”.
And when it comes to regions, there are a few choice areas where rent prices fall below the national average of €11.50 m².
Among the cheapest are the Midi-Pyrenees in the southern region of Occitanie, where rents are €10.40 per square metre and the historical region of Poitou-Charentes (now part of Nouvelle-Aquitaine) where rents are an average of €10.50 per m². File photo: RawpixelDepositphotos
Cheapest for students
For students, life in France is getting more costly. Rises in transport passes and rent have pushed up the living cost by an average of two percent in the past year – but some French cities still offer student life on a budget.
According to an annual study by France's main students' union, Unef, the cheapest city for students in France is the picturesque student town of Poitiers, which came out on top for cost of living, with monthly expenditures adding up to just 60 percent of what Parisian students pay.
It boasts the cheapest rent at just €323 per month and has a higher proportion of students than any other town in France.
Next was the Breton city of Brest which also made the top ten cheapest cities to live in, followed by Limoges in the southwestern Limousin and Saint-Étienne.
Angers, Perpignan, Clermont-Ferrand, Orleans, Le Havre and Caen also made the list.
Perhaps unsurprisingly, Paris topped the rankings when it came to the cost of living, with university students in the City of Light having to cough up an average of €1,193 each month for living expenses, according to an annual study by France's main students' union, Unef.
Jambon beurre
But it's not all about house prices… If you're going to move to France, you probably intend on eating your fair share of French cuisine – and what's more French than a jambon beurre?
These ham and butter baguettes are a staple and luckily information on how much they cost in different areas around France has been collected and compared, making it easier for you to factor it into your decision-making process.
And once again, it's unlikely to come as a surprise that the city where you'll fork out the most for one of these delicious baguettes is the capital where people pay an average of €4 for each jambon beurre they consume. Photo: Le Parisien
But enough of the most expensive…where's the cheapest?
Well, according to the study carried out in March, the cities with the cheapest jambon beurre are Nevers in central France and Epinal in the north east where you'll pay a very reasonable €2.57 compared to the average of €2.94.
READ ALSO: