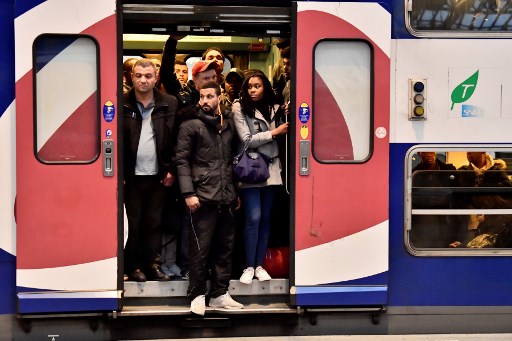 French rail authorities have announced that only a few TGV and Intercite services will be running on Tuesday May 8th.

The eighth rail strike since April will also see TER regional train services slashed in half and Transilien will run seven out of every ten trains.

International SNCF services will be two thirds operational during this two-day strike, which coincides with a public holiday in France, Victory Day.

The strikes have caused major travel headaches for the 4.5 million daily rail users in France although they are causing less disruption than when they first started on April 3rd when only one in eight TGV services was running. A month ago, President Emmanuel Macron was facing his biggest showdown with France's trade unions.
It was to be his “Thatcher moment,” some observers predicted, recalling a make-or-break time for Britain's prime minister in the 1980s.
By taking on reforms of the debt-laden SNCF railways, Macron has thrown down the gauntlet to one of the strongest bastions of French trade unionism — the same way Thatcher did with mining unions in 1984.
On April 3 rail workers launched the longest strike sequence ever for the network: stoppages every two days out of five until June 28.
Analysts agreed that if Macron backed down as a result, the 40-year-old centrist could kiss goodbye to further ambitious reforms of the civil service and pensions.
CGT union chief Philippe Martinez said last week that as with every strike movement, “there are highs and lows”.
“But it has settled at a high level,” he insisted. Photo: AFP
As the disruption enters its sixth week, however, there seem more lows to worry about than highs for Martinez, with momentum clearly in Macron's favour.
Having prevailed in his first clash with the CGT last October over changes to labour law, Macron appears to have the upper hand due in part to the fact that public opinion remains broadly behind government plans, the number of staff joining the strikes falling progressively and the fact that rail users have managed to adapt to the regular strike pattern.
On top of that, the rail strike has not spurred the wider, more powerful movement against the government to defend public services, which CGT leader Martinez has consistently called for and the unions themselves have been divided over how to approach Macron's plans to reform the vast French public sector, cut spending and ease rules and taxes for businesses.