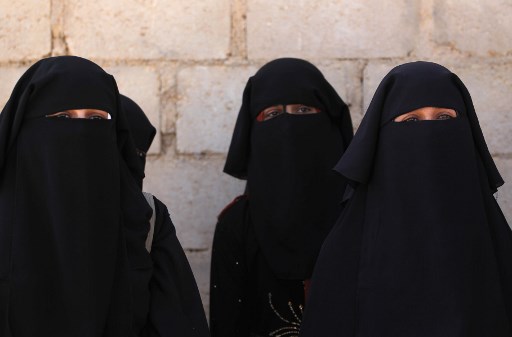 Only one third of France’s muhajirat in Syria went with their families. Photo: AFP

As France searches for preventative solutions to the issue of home grown extremists joining IS, an official document has emerged which goes against the stereotypical profile of the “French jihadist”.

The report, which France’s Le Monde newspaper has had access to, states that France’s Department of Justice has overlooked the role women have been playing for the Islamic terrorism group in Syria.

France’s Criminal Affairs division recently carried out the study titled “Women of Jihad”, based on the court hearings of “muharijat”, French women who returned to France after joining IS in Syria.

The most revealing aspect of this internal document is perhaps that most of these muharijat did not simply provide domestic support to their husbands in Syria as anti-terror experts have tended to claim.

“Although several French women were forced into joining the Islamic State by their husbands, most of the female recruits interviewed on their return to France expressed an attachment to the jihadist project,” Le Monde reports the memo as saying.

In fact, only one third of France’s muhajirat in Syria went with their families.

The women claim their decision to join IS stemmed from their dislike of the West, and the appeal of the Islamic caliphate, which they consider to be a way of practicing their faith without Western oppression. The report, commissioned to assist magistrates belonging to France’s Department of Justice, has already instigated the public body to automatically arrest all French female returnees.

Contrary to jihadist ideology that bans women from fighting, some muhajirat claimed they were given an operational role in IS’s ‘hisbah’ police, which refers to the Islamic doctrine of accountability.

Anyone sanctioned to form part of this morality police is given the powers to carry out punishments or lure future fighters on the internet.

“We may have been a bit naïve at the start, thinking that women were following their husbands and just sticking to domestic chores in Syria” public prosecutor François Molins told the leading French daily.

The report underlines the need to monitor female jihadists more carefully on their return than previously, adding that the greatest threat remains is with women being radicalized on home soil and who are still looking to join the caliphate.

A March 2018 study by the French Institute of International Relations which looked into the typical profile of the French jihadist focused overwhelmingly on male returnees.

As of January 2018, French authorities counted 298 French women who had joined IS, nearly half of the 676 adults surveyed (these figures do not take into account the many deaths that have occurred in recent months in Syria).

Of the 72 women who have returned to France, 26 have been indicted while fifteen have been arrested awaiting trial and six have been tried.

READ ALSO Aged 26. poor and already a criminal: Who is the typical French jihadist?