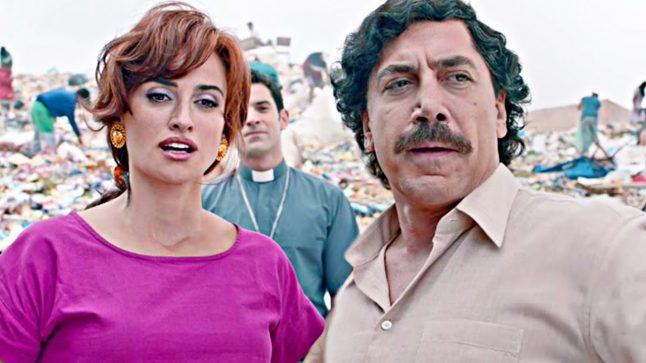 Cruz and Bardem are starring together in two films in 2018: Everybody Knows and Loving Pablo (pictured). Photo: Screenshot

The Oscar-winning actors both star in Iranian master Asghar Farhadi's Spanish psychological thriller Everybody Knows, which will kick off the festival and is up for the top Palme d'Or prize.

The couple's glowing return to the spotlight in Cannes comes after Bardem emotionally proclaimed his feelings for Cruz there eight years ago as he accepted the best actor award for Biutiful.

Cruz has also won at Cannes, sharing the 2006 best actress prize with five other women for their work in acclaimed Spanish film-maker Pedro Almodovar's drama Volver.

Bardem, 49, and Cruz, 44, have two children together and married in 2010 on an island in the Bahamas owned by their friend, US actor Johnny Depp. They also share a notable distinction – they are respectively the first Spanish man and woman to win an acting Oscar.

Bardem won his best supporting actor Academy Award in 2008 for his role as a determined murderer in the Coen brothers' No Country For Old Men.

But the couple live discreetly in a Madrid suburb, where they try to keep the spotlight away from their son Leo, seven, and daughter Luna, four.

The Hollywood couple are also starring together in another film set to reach cinemas in 2018: Loving Pablo. Bardem plays notorious Colombian drug lord Pablo Escobar, while Cruz stars in the role of Virginia Vallejo, a journalist he had an affair with.