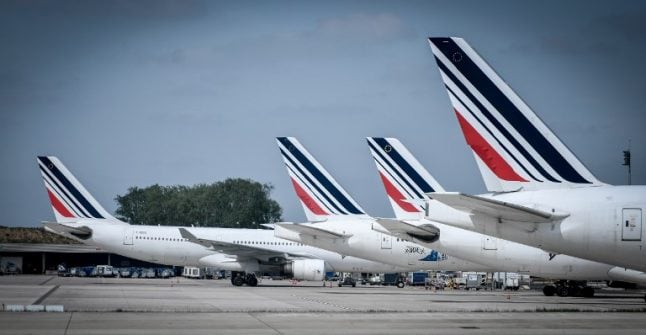 Photo: AFP
The troubles at Air France continued to rumble on on Monday May 7th.
Air France has said that “nearly 85 percent” of its flights would be operating, including 99 percent of long-haul flights, 80 percent of its medium-haul flights to and from Charles de Gaulle and 87 percent of short-haul flights to Orly airport and elsewhere in France.
Overall, this is the lowest cancellation rate since the start of the February when the pay dispute began.
It was estimated that 14.2 percent of pilots would be taking part in the strike, as well as 18.1 percent of flight crews and 10 percent of ground staff, according to Air France management.
READ ALSO: By comparison, over 21 percent of pilots were on strike on Friday May 4th and close to 19 percent on Thursday May 3rd. In February, March and April, their participation fluctuated between 27 percent and 36 percent.
Air France shares went into a tailspin on the Paris stock exchange on Monday after Air France-KLM boss Jean-Marc Janaillac announced his resignation on Friday.
His resignation was a response to staff at the carrier's French operations rejecting a pay deal aimed at ending months of walkouts.
Janaillac, who had been in the post for under two years and staked his future at the company on staff accepting the deal, deplored their decision as a “huge waste”.
In early bourse business Air France stock was down nearly 13 percent at 7.08 euros.
On Friday Air France announced a net loss of €269 million in the first quarter of 2018 and said the strike is set to cost the airline at least €300 million over the course of the year.
Staff and management at the carrier have been locked in a dispute over pay since February.
Intermittent strikes in recent weeks have prompted the cancellation of a quarter of flights on average.
Unionised staff are set to walk out for the 14th day on Monday as they press for a 5.1 percent salary increase this year as the company recovers from years of losses and restructuring.
France's economy minister on Sunday warned that the survival of Air France was now in the balance.
“I call on everyone to be responsible: crew, ground staff, and pilots who are asking for unjustified pay hikes,” Economy Minister Bruno Le Maire told the BFM news channel.
“Be responsible. The survival of Air France is in the balance,” he added.
He warned that the state, which owns 14.3 percent of the group, would not serve as a backstop.
“Air France will disappear if it does not make the necessary efforts to be competitive,” he warned.