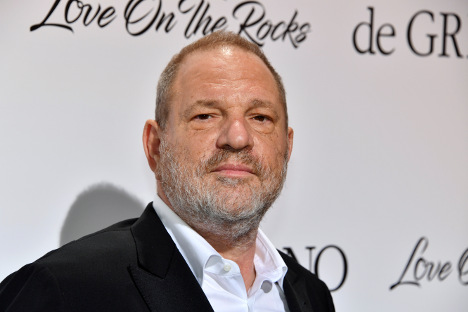 The world's biggest film festival has moved to align itself with the #MeToo movement against sexual harassment that has reverberated around the world since Weinstein's downfall.

The festival has condemned Weinstein's “unpardonable behaviour” after he was accused of four sexual assaults at Cannes over the years, including the rape of the Italian actress Asia Argento in his luxury suite when she was 21.

Director Thierry Fremaux admitted that Cannes “will never be the same again” after the Weinstein scandal, and said festival-goers will be warned about their behaviour when they arrive at the huge French Riviera event, which starts on Tuesday.

A flyer saying “proper behaviour required” will be handed out and a hotline and website set up for victims or witnesses of sexual harassment.

Women also dominate the jury that awards the top Palme d'Or prize this year, including French actress Lea Seydoux, who has accused Weinstein of assault.

The jury will be led by Australian actress Cate Blanchett, who helped launch the Time's Up campaign to tackle sexual harassment in Hollywood and was one of the first to speak out against Weinstein.

There will also be a talk about the place of women in film, but no unifying dress theme, such as the black dresses worn at the Golden Globes in support of Time's Up or white ribbons worn at the Cesars, the “French Oscars”.

However, critics claim that the festival is only paying lip service to real change.

“Cannes is a two-week celebration of male brains and female beauty,” said screenwriter Kate Muir, of the Women and Hollywood group which is pushing for great diversity in the industry.

“Many wheeler-dealers and producers still parade with paid-for models or prostitutes on their arms, which makes female film-makers deeply uneasy about what, precisely, is valued by the money men.”

The Weinstein affair may have rocked the film world, but the local tourism industry in Cannes expects little disruption.

Bruno Draillard, who runs eight real estate agencies that rent apartments in Cannes during the festival, said the scandal has had “no impact” on business.

“People come to do business, maybe they will just do it with a slightly lower profile,” he said.

During his years at the festival, Weinstein was known to wield his power as he hosted actors and actresses in his room at the exclusive Hotel du Cap, where Argento has accused him of raping her.

Was his behaviour well-known at the time? “We learnt about it from the media,” said local hospitality union head Alain Lahouti, a sentiment echoed by others AFP spoke to in Cannes.

The director of the Cannes Film Market, the huge deal-making hub that runs parallel to the main festival, also expects little change.

But other big companies like Lionsgate have filled the gap, he added.

Christine Welter of the Cannes hotel union said that the “film festival is above all about business”.

For her, another sexual harassment scandal had far more impact, that of ex-IMF chief Dominique Strauss-Kahn who was taken down by a US assault case brought by a hotel maid, the aftermath of which led to changes in hotel regulations.

Aline Buffet, who heads a team of seamstresses that help with last minute alterations, said “when there are problems, it's rather during the summer, in certain hotels or private properties with customers who prefer a massage rather than a fitting”.

She said the only incident she recalled was four or five years ago, when she sent two seamstresses to the room of two film stars early one morning.

“They (too) were asked to undress… but I went to see the producers and it was dealt with very quickly!”

There “have probably been other excesses” like Weinstein in the past, said beach worker Nathalie Di Sotto.

“It was the same in the time of Marilyn Monroe or Brigitte Bardot,” she added.

“There has always been this domination of men over women. But now it's become an issue.”

By Claudine Renaud and Olivier Lucazeau