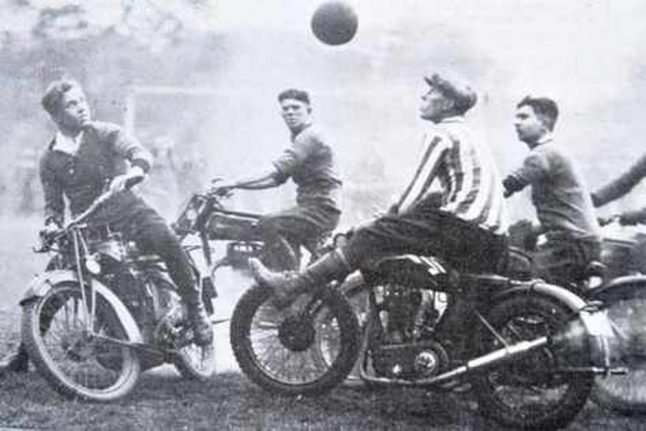 Motorcycle football was popular in Paris in the 1930s.
Paris, City of Light, hasn’t always been the birthplace of bright ideas.

Whether it’s fashion faux pas, life-threatening hobbies or dubious street magic, some events over the past century may not have lived long in the memory, had it not been for the inquisitive camera lens of France’s stiff upper lipped neighbours, les Britanniques.

Despite the often mocking tone of their pompous narrators, British Pathé captured countless mouth dropping moments in the French capital.

Here are some of the best, among British Pathé’s wonderful collection of 85,000 historical videos, all made available on YouTube in 2014.

Stunt drivers perform some pretty nifty tricks at the Champs d’Elysées long before the days of drifting and drag racing. The event was sponsored by France’s Road Security Organizaton, which as the narrator rightly points out, “is difficult to understand why”.

Deadly jump off the Eiffel Tower

Austrian-born Frenchman Franz Reichelt, known as the Flying Taylor, was a part-time parachuting pioneer who knew how to put his sewing skills to good use. That’s not to say he had a firm grasp on physics, as his death after jumping from the middle of the Eiffel Tower in 1912 proved. Despite his miscalculation, Reichelt’s wingsuit invention was later mastered into the kind used for base jumping nowadays.

Interesting video which says a lot about attitudes at the time towards male hairdressers (not including barbers presumably), as after 10 seconds the narrator hands over the reporting to someone putting on an effeminate voice, starting off by saying, “let me put my hand on my hip”.

A 1949 baby show that illustrates how France and Europe were in the midst of the post-WWII baby boom. “The kids think it’s high time all this nonsense stopped,” shouts the narrator towards the end.

This video may have no sound but wait for ‘old scary eyes’ to hit the screen a few seconds in. This unnamed hypnotist, who has a hint of Alex in A Clockwork Orange about him, eyeballs and gestures so violently at a Paris bystander that it’s hard not to see why she’d pass out.

The rest of this “Magicians in Paris” footage has a few other gems including a dubious séance and a man driving a convertible with a sack covering his eyes.

This hair-raising and slightly ludicrous sport of sorts was quite popular in France and the UK for a time. It won’t take you long to realise why it didn’t last.

Short quirky film that depicts British attitudes to the work ethic of French garçons. “The one day of the year when André, Jacques, Maurice and the rest of the slow-footed fraternity really get a move on,” the narrator digs sarcastically.

Catch glimpses right at the start and around 0’50 of a model sporting what looks like an alien mask with a veil over her head, during a 1954 Paris fashion show. The narrator introduces the unidentified fashion object with the line, “Think that’s daft? Well take a look at this”.

Another frightening faux pas to look out for is the woman with a hat covering her face, with two holes decorated as sunglasses for her to see through. Watch and learn, Lady Gaga!

A real oldie from 1929 that appears to show an innovative solution for struggling parallel parkers. Take a look and judge for yourself, it definitely seemed to help when pulling out of a tight spot.

It's hard to tell how much of this 1951 fight was choreographed but the hairy chested pair's non-stop flying kicks make for a very entertaining watch.