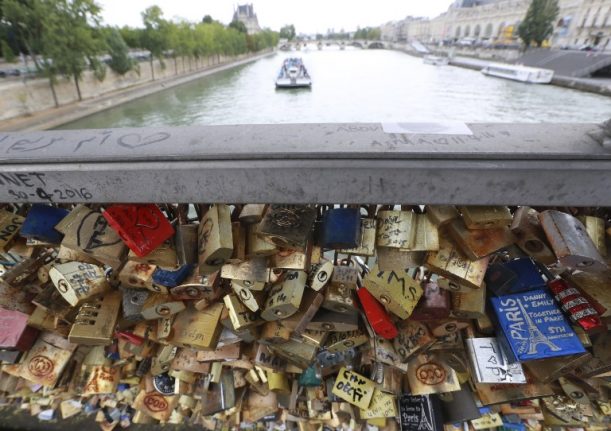 Love-locks are seen on the footbridge of Leopold-Sedar-Senghor in Paris. Photo: AFP
The problem just won't go away.
It's only been a few weeks since the Paris municipality cleared away over 40 tonnes of love locks from the capital's Pont Neuf bridge, and they have already started popping up again on bridges throughout the capital and around the city's Canal Saint-Martin.
Faced with the ongoing invasion of these small metal testimonies of love, Paris MP Yves Pozzo di Borgo put forward a proposal to Paris city council this week asking it to take measures to fight back.
But his calls for fining tourists found locking these padlocks onto bridges or the street vendors they buy them from, was swiftly rejected by the city's councillors.
“Fining these illegal vendors is the job of the police,” Véronique Levieux from the city council, told Le Parisien. “The other solution would be to ban the padlocks outright,” she said, which would, by extension, lead to fining the tourists using them. Levieux added that this was not a desirable option.
The City Hall will meet over the next few weeks to discuss alternative ways of dealing with the unwanted love locks, Le Parisien reported.
This romantic phenomenon has been giving city officials a headache for many years. In 2014, on the iconic Pont des Arts linking the Louvre to the Left bank, a chunk of railings weighed down by 54 tonnes of love locks crashed into the Seine.
Railings on this bridge and on the Pont de L'Archevêché have since been replaced by glass. The love locks were sold at an auction last May for €250 000, which the city hall donated to charity.
by Emilie King