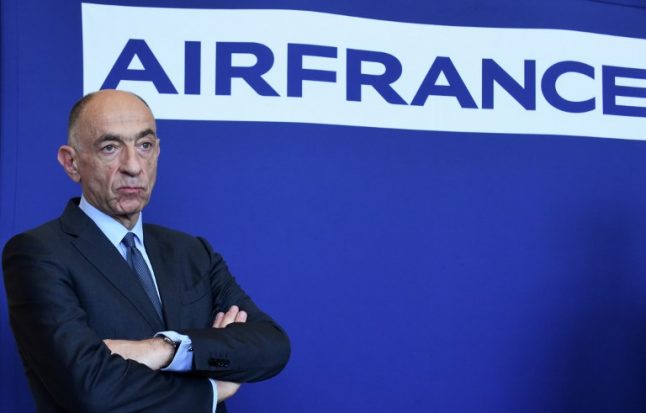 Air France-KLM boss Jean-Marc Janaillac. Photo: AFP
“I accept the consequences of this vote and will tender my resignation to the boards of Air France and Air France-KLM in coming days,” said Janaillac after 55.44 percent of Air France workers voted against accepting a pay rise of 7 percent over four years.
Air France announced on Friday a net loss of €269 million in the first quarter of 2018 and said the strike is set to cost the airline at least €300 million over the course of the year.
Each strike day has been estimated to cost the airline between €25 and €30 million, with the three-day strike in February and March costing the company a total of €75 million.
The results arrived on the 13th day of strike action, with further strikes scheduled for May 7th and 8th as staff continue to fight for better pay.
Staff and management at the French carrier have been locked in a dispute over pay since February.
Unions say workers deserve to benefit from years of belt-tightening that have returned the carrier to operating profitability, after seeing their wages effectively frozen since 2011.
Management says it cannot afford their demands of a 5.1 percent increase this year, saying it would undo the benefits of the restructuring efforts.
READ ALSO: