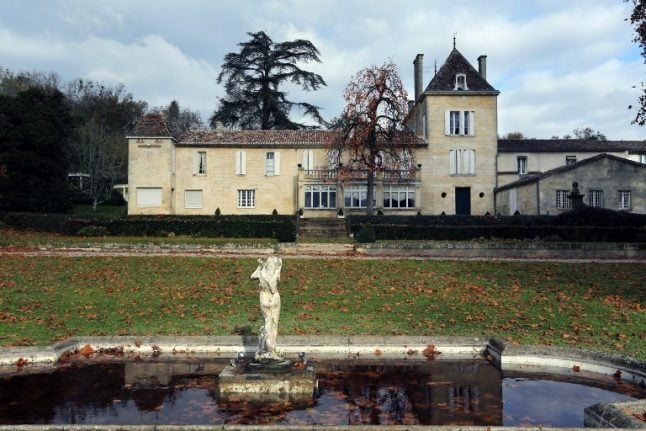 Chateau Bellefont Belcier estate and its vineyards, a Saint-Emilion premier grand cru classe in the southwestern town of Saint-Emilion near Bordeaux. Photo: AFP
Some left after seeing their investments wither on the vine, but Peter Kwok, who has no fewer than seven vineyards to his name, says he is here for the long haul.
The 69-year-old Hong Kong-based billionaire has been in southwest France for the past 20 years, recently snapping up Chateau Bellefont-Belcier, a Saint-Emilion grand cru.
Some in France's winemaking community are sniffy about the Asian investors who have bought up 140 chateaux in Bordeaux.
The acquisitions — though making up only 1.5 percent of the region's 7,000 vineyards — have stirred sensitivities about growing foreign investment, particularly Chinese, in strategic or heritage sectors.
In February, President Emmanuel Macron said he would work to prevent foreign investors buying French farms after it emerged that a Chinese fund had bought nearly 3,000 hectares (7,500 acres) of wheat fields in the centre of the country.
The Chinese tycoons present in Bordeaux see wine mainly as a way of diversifying their fortunes.
But Kwok, who has invested 60 to 70 million euros ($72.5-85 million) in the region, insists he's not in it for the money — though as an investment banker he keeps a eye on the numbers.
“Other friends who own vineyards warned me the only way to make a fortune in wine is to invest an even bigger fortune!” said Kwok, who heads the energy subsidiary of Chinese investment group CITIC. Peter Kwok. Photo: AFP
'Black coffee and baguettes'
It wasn't his love of a plummy merlot that brought the Vietnamese-born businessman to Bordeaux.
“My children study in the United States, so I was looking for a place halfway for vacations. France is halfway,” he told AFP in an interview.
But there was also a touch of whimsy in his decision to set up shop on the other side of the world.
Growing up in Vietnam under French colonial rule — living in the capital's sprawling Chinatown — he was enthralled by “images of De Gaulle, black coffee, baguettes and dreams of Paris.”
But instead of buying a pied-a-terre in the French capital, Kwok opted for a house in the country.
“I pictured a French country house, and it just so happened that it had eight hectares of vines around it,” he said. Photo: AFP
That was his first chateau, Haut-Brisson in Saint-Emilion, which he purchased in 1997, without ever having sampled the fruits of the vine.
He quickly learned that winemaking isn't just about planting and harvesting vines — it's a way of life.
And as in life, “there are many things that you cannot control. You do the best you can, but then you have to wait for nature.”
At first, he sold most of his wines in Asia, particularly Hong Kong, Singapore and mainland China.
But as the reputation of his wines grow so too has his global distribution.
With a few harvests under his belt his goal now is to build his “Vignobles K” brand.
“The other aim is to make good wine, which will also take years, but not quite as many.”
Wine as art
At Bellefont-Belcier, something of a sleeping beauty in Saint-Emilion, one of his first tasks will be to clean up the woods that dot the rolling limestone hills over which the estate is spread.
Kwok has earned his chops when it comes to revamping older chateaux, having restored the 18th-century dry masonry terraced vineyards at the Tour-Saint-Christophe estate he acquired in 2012.
Reflecting on those Chinese peers who bid farewell to Bordeaux after a brief dalliance, he said:  “It (owning a chateau) became the fashion. They just wanted the experience. But they slowly realised that winemaking is not the business they thought.”
His time in France, which he visits three or four times a year, has taught him that the key ingredient in wine is not equipment or skilled labour, it's the “terroir” — the land.
“It's like being the owner of a piece of art,” he said. “Only with wine, it's a piece of art you can work on.”