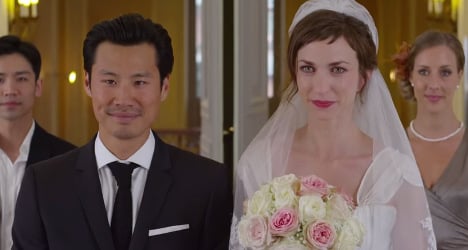 I hadn’t been in France long before it happened for the first time.

I was teaching business English to a group of students and we were discussing which accents they found difficult to understand.

One man – older than the others – said Chinese. To demonstrate, he put on a Chinese accent and pulled the skin at the outer corners of his eyes.

The rest of the students laughed. I was horrified. I hadn’t seen someone do ‘slit eyes’ since the school playground in the 80s. Why was a grown man doing it? Why was everyone laughing?

The moment passed, but my confusion over the incident remained.

How could anyone be so flagrantly racist? This was a professional setting, it wasn’t as if he was letting deeply held and concealed racist opinions spew out on Twitter.

Rationalising it, I decided that the problem was generational: he didn’t realise that he was being racist and the others laughed to diffuse an awkward situation. It was weird but it was a one-off thing.

Except it wasn’t. The joke was repeated half-a-dozen times over four years with a variety of ages and races finding it hilarious.

Other Anglophone expats would tell me about similar incidents or inappropriate jokes they had witnessed. I began to doubt my initial interpretation. Were French people racist or are these things somehow not considered racist in France?

An answer of sort was provided by the popular 2014 French film Qu’est qu’on a fait au Bon Dieu, a comedy about a white Catholic couple with four daughters, three of whom are married to people of different races and religions – an Algerian Muslim, a Jew and a Chinese man.

The story centres around the fourth daughter’s impending marriage to an African from Côte d’Ivoire and the family’s attempts to derail the nuptials.

There is a great deal of racial stereotyping and trading of insults on all fronts but the peculiar thing, from an Anglo perspective, is the lack of condemnation of this behaviour.

While in France the film was considered “a triumph” and “hilarious” (Le Figaro) it wasn’t shown in Britain or the United States because it was too “politically incorrect” or in other words borderline racist.

According to Sabine Chemaly, from French TV channel TF1 who was in charge of selling the film around the world said audiences in the US “would never allow themselves these days to laugh at blacks, Jews or Asians”.

“They have a cultural approach very different from ours,” she added.

“The sources of comedy are different,” said Chemaly. “In these countries, they do not know how to laugh at differences, they live with them, but do not accept the caricaturing of the subject even through comedy.”

And then there is all the blackface.

It is not uncommon to see French people dress up as black people for costume parties. French footballer Antoine Griezmann posted a photo of himself in costume as a Harlem Globetrotter on social media.

After the resulting outcry — much of which came from abroad rather than France — Griezmann apologised, explaining that he intended it as a homage to the team. How can something that is so incendiary in one culture be seen as just a bit of harmless fun in another?

In Anglo Saxon culture, blackface is associated with a toxic period in American history where white people wore black face paint in minstrel shows to perform mocking and dehumanising portrayals of freed and enslaved black people. The link between the costume and the social situation make the racism clear – to us.

But taken out of context – in a country like France, where its associations with slavery and oppression are less evident – is blackface actually OK?

No, most would say, ignorance is not a defence: blackface and other forms of humour at another race’s expense are inherently wrong, regardless of the situation and however well intentioned or innocent the motive behind them were.

Perhaps in France’s case, it will be a matter of ‘catching up’ with the United States, the United Kingdom and others, in matters of racial sensitivity.

The Black and White Minstrel Show ran on British television from 1958-78, drawing audiences of 21-million viewers. This massively popular programme is now looked back on with an embarrassed attitude of “What were we thinking?”

In thirty years time, will French people feel the same about blackface and ‘slit eyes’?

Ultimately, it's not for me – a white person and a foreigner – to judge.

This is a conversation to be led by French people of colour.