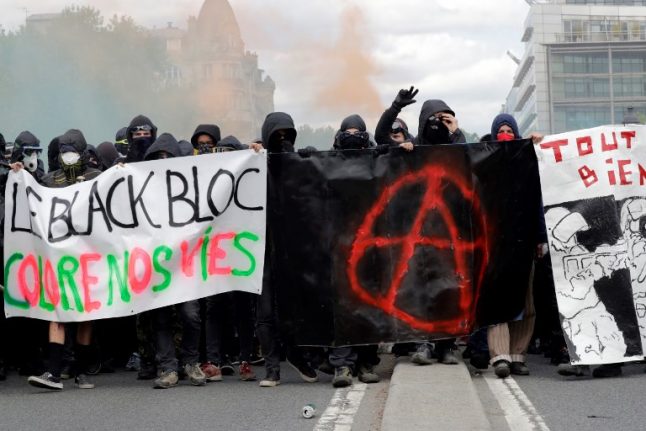 Protestors chant slogans as they march behind banners during a demonstration on the sidelines of a march for the annual May Day workers' rally in Paris. Photo: AFP
Violence marred the May Day demonstrations in the French capital on Tuesday as over 1,000 black-clad protesters — many wearing balaclavas and some with gas masks — ran amok in the streets of Paris.
Who are these so-called 'black bloc' protesters and how can French authorities and police stop them from causing mayhem?
What happened on May 1st in Paris?
Last week calls wen out on social media — both in French  and English — for people to take part in a “revolutionary May 1” on the 50th  anniversary of the 1968 student and worker protests which nearly brought down  the government of the day.
On Tuesday Hundreds of protesters in black jackets and face masks had tried to hold up the Paris march and then ran amok along the route, looting and setting fire to a McDonald's restaurant, torching a car, a mechanical digger and a scooter.
Other shops were also destroyed along the route.
Here's a look at the damage they cause in pictures.
It was not the first time demos in Paris have been hijacked by a group of youths seemingly intent on violence. The anti-labour reform protests of 2016 and several union protesters in 2018 have all seen scenes of similar violence. But Tuesday's May Day riot was on a different level.
The French police, who had been worried about the possibility of protesters joining the march to disturb the public order, used tear gas and water cannons to try disperse them.
“We'd had information that made us fear their presence,” Paris police chief Michel Delpuech told the French press. “These individuals were motivated by the desire to disrupt this parade.”
According to the police, the activists had spoken of a “May 1st from hell”.
The activists were referred  to as so-called “Black bloc” protesters and they themselves carried banners referring to that name. “Macron has put us in black anger,” read one banner.

Police said 109 people were in custody after the violence, which has sparked criticism in the press that the government was unprepared for the disruption.
Who are these “Black bloc” protesters?
“Black bloc” protesters fall on the extreme left of the political spectrum and regularly clash with police at demonstrations around the world. They are also described as anti-capitalists, anti-globalization, anarchists and anti-fascists.
On Tuesday in Paris, in addition to signs reading “Everyone hates the police” and “Rise up, Paris”, they held banners saying, “Macron puts us in a black rage”.
One of the protesters, who described himself as a 19-year-old student, in Paris on Tuesday told AFP: “We are tired of this capitalist system that destroys everything and the brutal police repression against those who oppose it.”
“We want a radical change, we want people to be listened to, we want environmentalism, anti-globalization,” he added.
Another said: “We're here because the situation is apocalyptic. For two months we've been trying to get the universities and the rail workers to rise up but it's not working.”
While another 19-year-old masked protester, who described himself as a student told AFP: “We are sick of this capitalist system that destroys everything, of brutal police repression of those who oppose them.”
They usually organize around a core of 450 to 500 very determined individuals and are hostile to the “repressive system” and to putting people on file. They are also against criminal laws and the penitentiary system, as well as capitalism and globalization.
They've been known to wear wigs, gas masks and balaclavas and use Molotov cocktails and hammers to carry out their disruption.
“These ultraradical left are all violent anti-globalization fighters,” said a spokesman for France's Interior Ministry, adding that “they hate law enforcement.”
One French policeman described the members of the movement as “very mobile, they are masters in the art of changing their appearance and clothing during demonstrations.”
Before the May Day protests, which usually sees union workers march through the streets of the capital, calls for the 'black bloc' to mobilise were circulated on social media.
The police believe that some of the 'black bloc' protesters involved in the violence of May 1st will also have taken part in the student occupation of universities and been part of the anti-capitalist camp at Notre-Dames-des-Landes near Nantes in western France, which was set up 10 years ago to fight plans for a new airport.
Recent efforts to clear the camp ended in violence Photo: AFP
How do they work?
The movement is experienced and well-organised to the point of exchanging advice on the internet about how to behave if they are taken into police custody or searched.
In 2009, this advice had been refined to a few instructions written in a guide for the activists, which includes advice such as, “Take a headscarf or something to hide your face, do not use a mobile phone full of contacts for the sake of your comrades and never forget that there are a lot of police wearing civilian clothes.”
It also says, “Never speak of your exploits in the street and avoid saying names out loud, write the number of our lawyer on your arm, take pictures of your wounds and keep your blood stained clothes, and if you end up in an emergency room with a doctor, do not tell them what happened.”
Why do they wear black?
Drawing inspiration from the German 'black bloc' movement of the 1980s, these groups wear black and cover their faces with hoods and masks to avoid being identified by the police.
These are generally small groups of highly mobile individuals, made up of young people from most European countries. But especially from Germany, Italy, Spain or Greece.
“Their German comrades have inspired them with all the know-how,” a senior police official told Le Figaro for an article on Notre-Dame-des-Landes.
Are they all French?
According to police sources, some of the protesters on May 1st came from other countries around Europe although police have not released details including the nationalities of the 109 who were still in custody on Wednesday morning.
Some of them are already known to the police. So, what can the French police do about them?
The French government and police both came under fire Wednesday for not doing enough to prevent the Black bloc youths running riot.
“Governing means planning ahead,” read the headline in one paper.
These types of protesters pose a problem for the police due to the fact that they are so difficult to control, responding quickly and often spontaneously to events.
This modus operandi is particularly helped by social networks which can also be used to protect their identities.
“They even communicate with each other in an encrypted way, helped by computer scientists who guarantee them ghost IP addressesm” said a spokesperson from the General Directorate of Internal Security (DGSI).
This means that in general the police have tended to underestimate how many people will be joining the 'black bloc' movement at any given event.
“There is no doubt that preventive controls and arrests, prior to the event, should have been carried out systematically,” said French police union Alternative on Wedneday.
“However, if the responsibility of the authorities is certain, the responsibility of certain unions and left-wing political parties is just as important,” the union added. And in an interview on RMC, David Le Bars, a representative from the national police union, pointed out that it is difficult to stop people, even those known to the police from demonstrating because protests take place in the street.

“It's more difficult than preventing known hooligans from entering stadiums,” he said, adding that it was really a question of “political will”.
French Interior Minister Gerard Collomb has pledged to look again at how to police protests given the rise of far-left “black bloc” protesters.
“For the next demonstrations there will be even more security forces, this  time with the intention of totally separating protesters from those who have
come to smash things up,” Collomb told France 2 television.
But he defended the way police had handled the violence, saying little  could be done to stop trouble-makers from infiltrating the crowds.
“We can only detain a certain number of people who turn up like you or I in  civilian clothing and then suddenly are dressed in 'black bloc' outfits in the middle of the crowd,” he said.
“We cannot keep up, even with 21 police units mobilised against movements which all of a sudden appear on a scale we've never seen before.”
President Macron, never one to shy away from a confrontation himself, has vowed to deal with the rioters, who he described as “hooligans”. But his government, just like the previous ones, may find it difficult to come up with a solution.