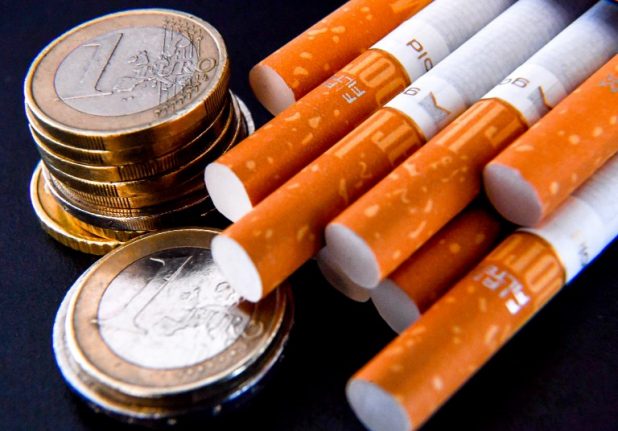 Photos: AFP
Price of cigarettes
Smokers in France will notice a slight change to how much a packet of cigarettes costs in May, with brands across the tobacco industry aligning their prices.
And depending on your label of choice, you could be paying a little bit more or a little bit less.
Camel cigarettes are set to drop their prices to €7.90, while Pall Mall and Winfield will drop to €7.80, and Lucky Strike will go down to €7.70. Photo: Lara Cores/Flickr
Meanwhile Brown and Gypsy Gauloises will increase by 10 cents to €8.90 and 20 cents to €9.20, respectively.
Some brands including Marlboro, Philip Morris and Gauloises Blondes will keep their price of €8, and Winston and Chesterfield cigarettes will remain at €7.80.
As a result of the changes on average a packet of 20 cigarettes will set smokers back by €7.90 euros, according to France's Ministry of Health.
Smokers in France already experienced a price hike at the beginning of March as the French government carries out its promise to increase the price of a packet of cigarettes to 10 euros by 2020.
Car inspections
From May 1st, car inspections are set to be more rigorous in France.
Instead of 123 points of inspection in your car, there will be 132 and if your vehicle has something wrong with it, such as a leak or lack of brake fluid, a sticker will be placed on your windshield and you will be asked to go for a follow-up inspection and repairs within 24 hours.
If you fail to get the repairs done, a fine of €135 will be dished out (€90 if you can pay immediately).
Price of gas
Natural gas tariffs set by French energy giant Engie, which concern several million customers in France, will increase by 0.4 percent on May 1st, France's Commission for Energy Regulation (CRE) announced on Friday.
“This increase is 0.1 percent for those who use gas for cooking, 0.2 percent for those who use gas for cooking and hot water and 0.4 percent for homes that have gas heating,” said CRE.
; Photo: AFP
Television
France's  national digital terrestrial television service TNT (Télévision Numérique Terrestre) is set for some frequency changes during the month of May.
The following ten French departments will be affected: Jura, Haut-Rhin, Doubs, Saone-et-Loire, Nièvre, Allier, Côte-d'Or, Haute-Marne, Haute-Saone and Vosges.
Viewers using an individual antenna will be able to “perform a search and memorization of channels”, says the TNT website.
However a television viewer living in collective housing must check that their building manager got a professional to carry out work on the collective antenna. If this is not done, says the site, television channels may be lost once the deadline has passed.