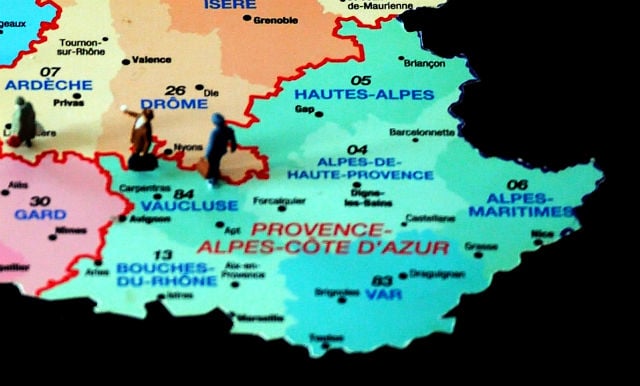 It's the south-east of France, where you can sail in summer and ski in winter, follow in Napoléon's footsteps or see where Van Gogh lived and worked.

Take a look at 43 maps that paint a picture of the region.

Here is what's known as the Greater South-East, comprising all of France's Mediterranean coastline plus the French Alps.

Since France redrew the map in 2016, the south-east is divided into two main administrative regions, Auvergne-Rhône-Alpes and Provence-Alpes-Côte d'Azur (PACA), which this article is concentrating on.

Here are the main geographical features of Provence-Alpes-Côte d'Azur.

Now for some history. Here's how the south-east looked before the Roman invasion.

And here's what the Romans turned it into.

And here are the divisions drawn up at the time of the French Revolution.

The south-east of France is full of historic sites, some of which have been made Unesco World Heritage sites. 2. Roman Theatre and its Surroundings and the “Triumphal Arch” of Orange (1981)

But one of the main attractions of the area is the French Riviera, or Côte d'Azur as it is known in French. The map below shows the main towns and coastal resorts along the stretch of coast that runs from Toulon in the west to Menton in the east. And of course people come to the Côte d'Azur for the beaches. This map from Plages TV shows where “the most beautiful beaches of the French Riviera” are. It also shows which ones are sandy and which ones are pebble beaches. And this map from Plages TV might be helpful for dog owners as it shows where the “dog-friendly” beaches are along the Riviera.

South-eastern France is regularly hit by small earthquakes but experts believe a big one could strike the region. The map below of the seismic zones in France shows why. The south-east of the country is at the greatest risk.

Still tempted? Here's how to get in, out and around: first, by motorway.


See ViaMichelin.fr for an interactive version.

These are the region's high-speed rail connections with Paris, where you'll arrive at Gare de Lyon.

And the local rail routes in Provence-Alpes-Côte d'Azur.

Don't forget you can also take the train all the way to the UK. Here are Eurostar's international connections to the south-east.

Find an interactive version on Eurostar.com

You also have the Med on your doorstop. Here's where you can take a ferry.

Here are the closest airports.

And just in case, here are all the helipads on the ritzy Côte d'Azur. Because it's the kind of place where people use them.

If you're sticking around, here's a map of the main cycle paths.

By Adrien Caillot/AF3V – click here for an interactive version

Fancy following in an emperor's footsteps? Here's the route through the south-east taken by Napoléon Bonaparte on his return from exile in Elba. Gilded imperial eagles still mark the way today. 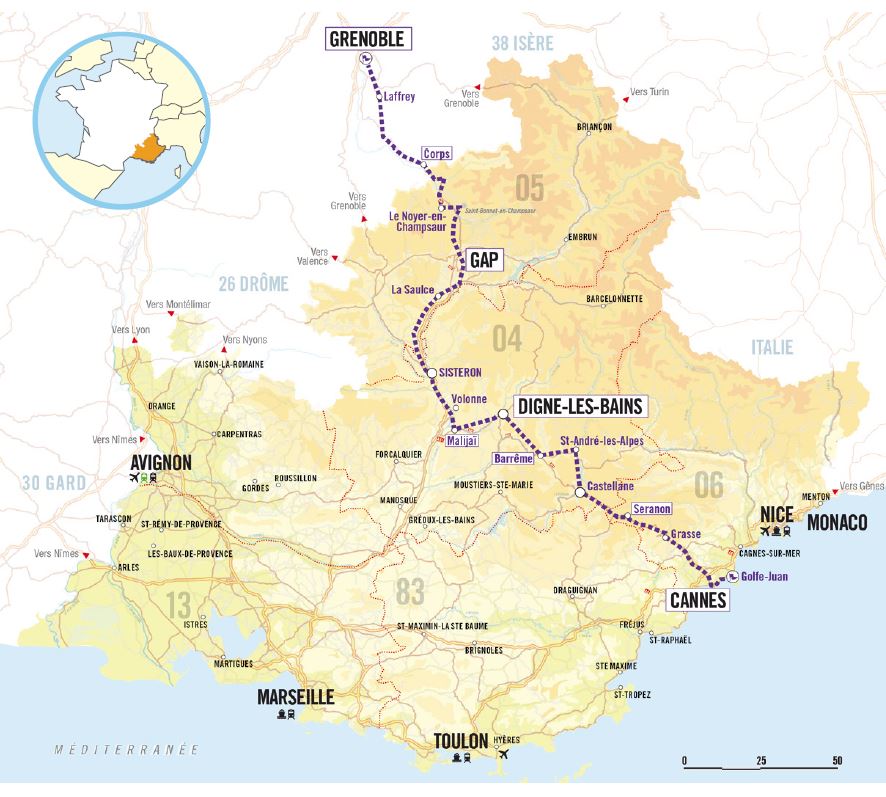 If you're thinking of staying for good, here's where you find the highest and lowest population density (red: highest, yellow: lowest).

These are the average hourly wages: Aix-en-Provence has the highest rate.

Here's how the region voted in the last presidential election.

As you can see, the south-east is one of the few parts of France where voters preferred far-right Marine Le Pen (dark blue) to Emmanuel Macron (purple) in the second round: Provence-Alpes-Côte d'Azur is the Front Nationale's traditional heartland.

Here's how much a property in each region will cost you per square metre, on average: Provence-Alpes-Côte d'Azur is one of the priciest in France, but you might find a bargain in Auvergne.

Click through to the interactive version to compare rental properties, too.

And here's where you might have some luck finding a place: the percentage of total housing that lies empty (the darker, the higher).

And these are the areas where you're most likely to find houses, as opposed to apartments. Darker areas have a higher percentage of houses among their total properties.

Hoping for English-speaking neighbours? Here's the number of Brits that live in each department. (For a nationwide view, read our department-by-department breakdown of where all the Brits in France live.) In fact, the south-east has some of France's highest concentrations of foreigners of all nationalities, especially in Marseille and along the Riviera. The map below map shows what percentage of the total population foreigners make up.

The Local's research shows the south-east is especially popular with Americans and Canadians, and has one of the largest Indian communities outside Paris. 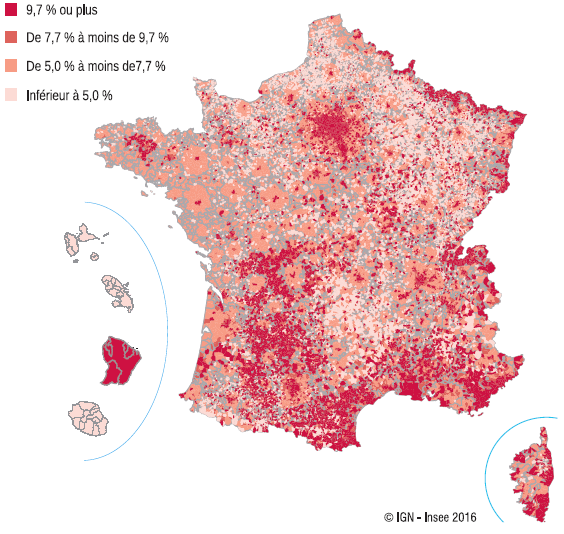 If you want to fit in with your French neighbours, you'll have to master the local language. In addition to standard French, here are the dialects you might hear spoken in and around the south-east.

And here's a closer look at regional variations of the Provençal dialect.

Then there's certain words that you'll only hear in the south-east, like “dégun”.  It means “no one”, and you'll hear it mostly around Marseille.

On to the crucial stuff: food. Here are the traditional specialities of the south-east. (See also: The Local's food map of the whole of France.)

Let's focus on the all-important cheese.

Of course you'll be accompanying your meal with something to drink. Here are the wines of Provence.

Wine isn't the only tipple on offer (Pastis, anyone?). Here are the other liquid specialities of the south-east (for more detail, see The Local's ultimate booze map of France).

Provence is famous for a more fragrant export too: here's where you'll find lavender blooming and when.

Find a bunch of suggested routes through lavender country on MoveYourAlps.com.

No wonder the flowers smell sweeter in the south-east: this map shows its hours of sun per year. It's clear the region hit the jackpot. Looking for somewhere to cool off? These are the pristine swimming spots certified with the Pavillon Bleu standard of cleaniness.

And here are the south-east's many regional (green) and national (red) nature reserves, not least the spectacular Camargue.

Maybe some like it cool. The south-east is great fun in winter, too: here are your main skiing options in the Alps.

If culture is more your thing, here's an artistic map of where Vincent Van Gogh lived and painted in the south – including the asylum in Saint-Rémy-de-Provence where he spent his final year. 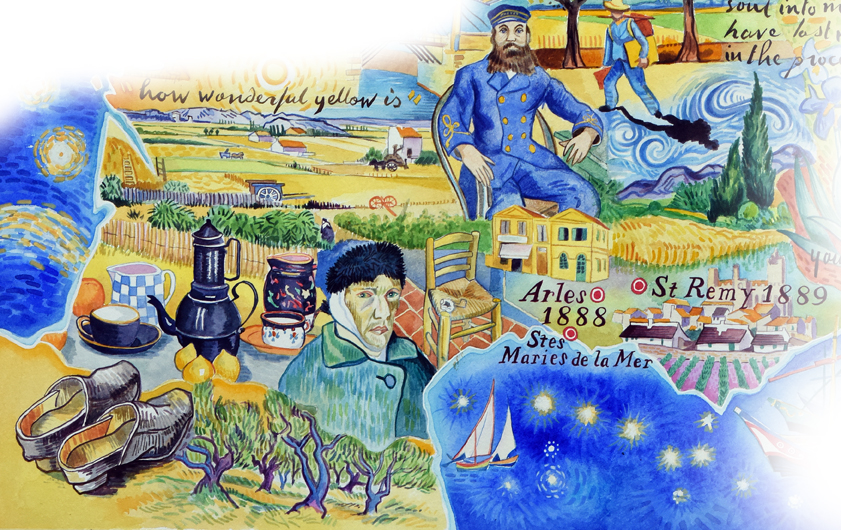 Finally, here's how to think like a local: the map of France as seen by natives of Marseille – which, just remember, is the one true capital.