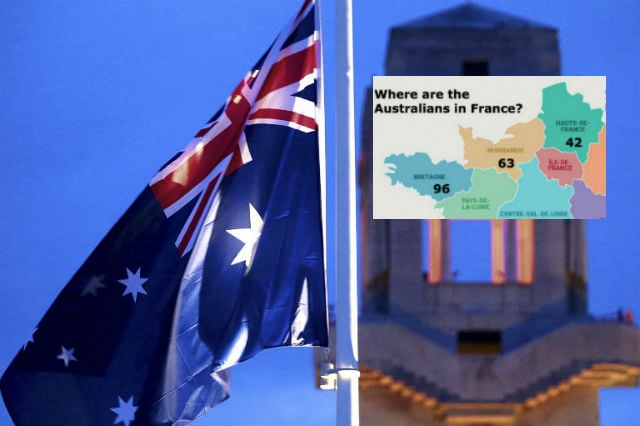 Did you know there are almost 4,000 Aussies in France?

That is, at least, according the latest stats from National Statistics Agency Insee. But the Australian embassy puts the figure a bit higher, at “an approximate 5,000”.

An embassy spokesperson told The Local that it's near impossible to have an accurate figure, considering some Australians never register themselves in France, some dual nationals maybe register under their second nationality, and some Australians are moving freely in the Schengen zone.

If we focus on the 2014 figures from Insee, we can get a good insight into where the Australians can be found in France. First, a glance across the country, followed be an in-depth look at all 13 regions.

There are 3,996 Aussies in France. The top region is The Greater Paris region of Ile de France, where there are 1,523 Aussies, 917 of whom live in Paris, which is the top department.

The top region (outside of Ile de France) is Auvergne-Rhone-Alpes with 591 people from Down Under. The top department (outside of Paris) is Alpes-Maritimes in south eastern France, which is home to 244 Aussies.

The least popular department is Meuse in the north east, which doesn’t have a single Aussie.

The embassy pointed out that it's no surprise the touristy areas like Paris and the Mediterranean areas are popular, but added that there were other pockets of the country with strong populations of Australians.

Cherbourg in north western France, for example, has welcomed around 30 Aussie families due to the Future Submarine Program, the embassy noted.

And there are often Australians to be found – even if they're only passing through – at Australian war memorials in the Somme department, where thousands of Australian soldiers died in World War One. But overwhelmingly, Australians call Paris home when it comes to living in France. So let's begin with the Ile de France region.

As mentioned above, this is by far the most popular region for Aussies. 917 live inside the city limits, while the neighbouring departments of Yvelines and Hauts-de-Seine are both popular backups with 179 and 178 Aussies respectively. The other five departments all have several dozen Australians as residents.

This region in central France isn’t so popular with Australians (or expats in general). There are a total of just 49 Aussies in the region, out of a total of 4,407 expats.

You’re most likely to find Australians in Indre-et-Loire, where 18 Aussies live. The other five departments have just a handful of Aussies.

This region is home to just 63 Australian expats, a mere drop in the ocean compared to the 3,813 Anglos in the region. We give a special shoutout to the solitary Aussie living in the department of Territoire de Belfort, but the department where you’ll most likely find a tub of Vegemite is Cote-d’Or which is home to 17 Aussies. The other six departments have between 2 and 15 Aussies in each.

This region is home to just 63 Australian expats, with Calvados the most popular department at 17. There are 16 in Orne, and 11 in both Manche and Seine-Maritime. Once again, the 63 Aussies are just a small portion of the 9,097.

Note: With the recent Future Submarine Program (mentioned above), there are likely to be many more Australians now living in the Manche department, where Cherbourg can be found.

Just 42 Tim Tam eaters live in this department, with the department of Nord the most popular with 18 Aussie residents. No more than a handful live in the other four departments.

Only five Australians live in the Somme department, which may come as a surprise considering it’s essentially the most Australian of all French departments. It’s home to the village of Villers-Bretonneux, where over 1,000 Australians died in World War One. In fact, the Australian flag flies still at the village’s Australian National Memorial, there’s a Rue de Melbourne, and a school called Victoria College. Spare a thought for the solitary Aussie in Ardennes, but don’t bother seeking kangaroos in the department of Meuse because it’s the only department in all of France with no Aussies. Meanwhile, there are 35 Aussies in Meurthe-et-Moselle and 29 in Haut Rhin, but the other five departments have just a few Aussies each.

There are 84 Australians over the five departments in this western region. By comparison, there are 7,313 Brits so they’re well and truly outnumbered. Loire-Atlantique (39 Aussies) and Maine-et-Loire (30 Aussies) are the most popular, the other three departments all have fewer than ten Aussies.

In the north west you can find 96 people from Australia, an incredibly small amount compared to the 14,581 Anglos out there. The Aussies are fairly evenly spread out over the region’s four departments, ranging from 13 in Morbihan to 35 in Finistere. (Aussie bagpipers in Lorient during the traditional Interceltic Festival of Lorient.)

In the south eastern reaches of France you can find 43,833 Anglo expats, 340 of whom come from Down Under. Pyrenees-Atlantique is the most populated by Aussies with 89, followed by Gironde in hot pursuit at second. The other ten departments range from 3 Aussies in Creuse to 54 in Dordogne, which, for the record, has a whopping 7,285 Brits.

There are 13 departments in Occitanie and 502 Australians. The winners, in terms of total Aussies, are Aude with 127 Aussies and Haute-Garonne with 124 (each have around a quarter of the total region’s Aussie population). Other notable numbers include the Lozere department (just 2 Australians) and Aveyron, with three. The other nine departments have a spread from 9 Aussies in Tarn-et-Garonne to 73 in Herault.

This region has 12 departments and 591 Australians – the most in any region besides Ile de France. They’re mostly findable in the department of Rhone (158 Aussies), Haute-Savoie (153 Aussies) and Ain (118 Aussies). There are but two Australians in Haute-Loire, and fewer than 100 in the eight other departments in the region.

In the sunny south of France you’ll find 462 people from Australia. More than half are in the department of Alpes Maritimes (244 Aussies), followed by 147 in Bouches-du-Rhone. While there are just 5 Australians in Hautes-Alpes, the rest of the three departments have 66 Aussies between them.

Lastly, there are just seven Aussies in Corsica. There are four on the south island and three on the north.