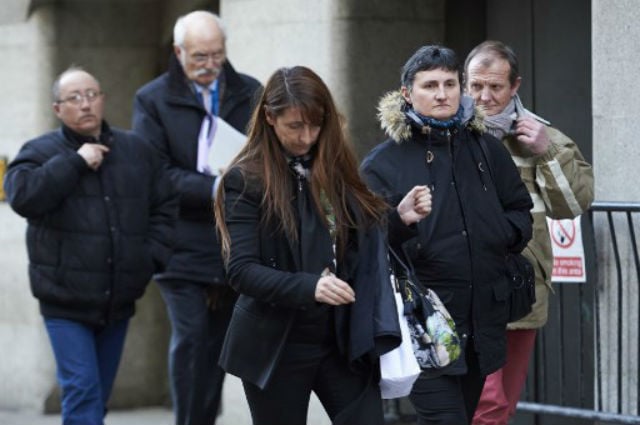 The parents of murdered French au-pair Sophie Lionnet leave the Old Bailey, London's Central Criminal Court, on March 19. Photo: Niklas Hallen/AFP
Sabrina Kouider, 35, and Ouissem Medouni, 40, both deny killing 21-year-old French nanny Sophie Lionnet, although he has admitted burning her body in  their garden in September last year.
She told the court Medouni interrogated the victim over their belief she was conspiring with one of Kouider's former boyfriends, Mark Walton, a former member of Irish band Boyzone.
Medouni — who is also French — became aggressive after Lionnet said she had drugged him and allowed Walton and an accomplice to beat and sexually abuse him, according to Kouider.
“He was really, really upset and grabbed Sophie in the face telling her 'why did you do this to me, how come you drugged me?'” she told jurors.
Kouider said her partner had undressed and demanded Lionnet show him where on his body he had been touched. He then took a big saucepan with water in it and, with a wet towel on the  nanny's face, put her head inside the pan, she added.
“I was shocked and scared”, the defendant said. “He told me not to get involved. I told him to stop and he refused.”
Kouider said she went to lie down and when she returned Medouni was by Lionnet's body.  “He said that he did not mean to (kill her), that she was driving him crazy and that it was an accident”, she told the court.
The 35-year-old, who has admitted pushing and beating the victim with an electrical cable, said she suggested burning the body but it was her partner who lit the fire.
Firefighters discovered Medouni trying to burn the corpse in their garden on September 20.
He has testified they both interrogated the au pair over her links with Walton, but said his partner carried on after he went to sleep.  The trail continues Tuesday, with the jury expected to retire on May 9.