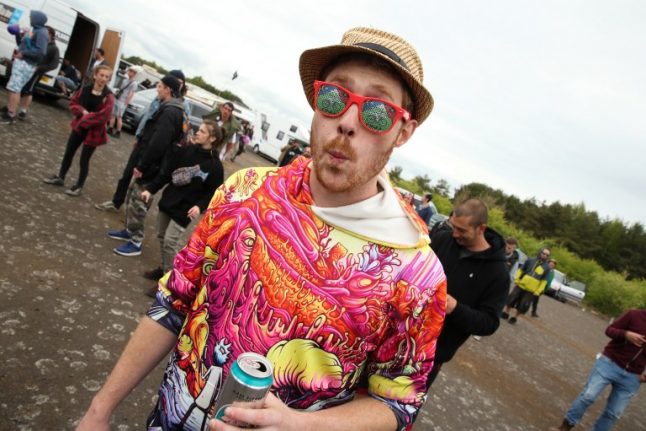 Ravers at the Teknival techno festival held at the former NATO military base near Marigny in eastern France on April 28, 2018. Photo: AFP
The gathering at an abandoned former military site in Marigny in northern France was for the 25th edition of Teknival, an unauthorised electronic music festival that is meant to last until Tuesday.
Local group Conservation for the Natural Areas of Champagne-Ardenne filed a police complaint on Monday and said local authorities had not done enough to prevent the damage.
Roger Gony from the association said that the base had 410 species of flowers and plants, as well as rare orchids which had led the base to be declared a nature reserve in 2005.
“It's a critical period for local fauna: the birds need peace and quiet.
;
Photo: AFP
When we go, we get authorisation and we enter extremely discreetly in order not to disturb them,” Etienne Clement from a local bird protection group said.
He said that nearly 200 tonnes of rubbish had to be collected at the site after the last Teknival event in Marigny in 2005.
The festival is an annual illegal rave for techno fans that is held at a secret location which is revealed only at the last minute.
At the military location in Marigny, dozens of different sound systems lined the former runways, while revellers parked vans and camped out throughout the base.
Part of its appeal is its uncommercial, illegal nature, as well as the open sale of drugs such as cocaine and ecstasy.
“If it was legal, there'd be more lights, more beer tents and kebab shops on the tarmac,” one attendee, 30-year-old Raphael, told AFP on Sunday. “It would be like a giant club.”